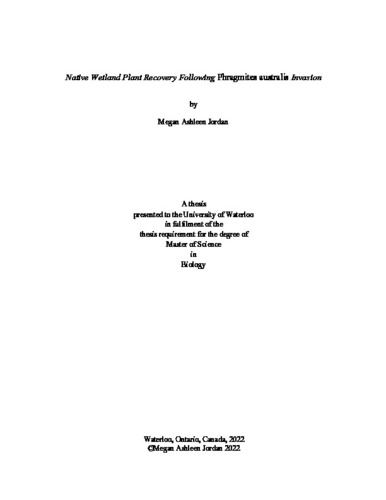 Invasive common reed (Phragmites australis ssp. australis) has negatively affected 25% of all Species at Risk in Ontario since its arrival in the twentieth century. This is of particular concern at Long Point and Rondeau, two wetland complexes located on the northern shore of Lake Erie. To combat the negative effects of P. australis, over 1500 ha of invaded marsh was treated with a glyphosate-based herbicide, beginning in 2016. We monitored the vegetation communities in these wetland complexes over five years to track changes in the wetland vegetation following herbicide application. In the two years following herbicide application, a secondary invasion by Hydrocharis morsus-ranae was observed but was short-lived. Three to five years following treatment, treated plots shifted towards native-dominated vegetation communities. However, with lower Lake Erie water levels predicted in the next five years, these communities are expected to change, as more seedlings will emerge from the wetland seedbank. To predict what may return to treated areas, and to determine the effects of herbicide treatment on viable P. australis seeds in the seedbank, we performed a greenhouse emergence experiment with seedbank samples collected from invaded, herbicide-treated, and native reference marsh. We determined that while a high abundance of viable P. australis remain in the seedbanks of invaded areas, treatment followed by flooding for a minimum of one year effectively reduced the number of viable P. australis seeds. The seedbanks of all three vegetation types contained many native seeds but contained many non-native seeds as well. Further monitoring of the vegetation communities that emerge as Lake Erie water levels decline is recommended to ensure that the vegetation communities at Long Point remain native-dominated, and that low water levels do not facilitate the reinvasion of P. australis.