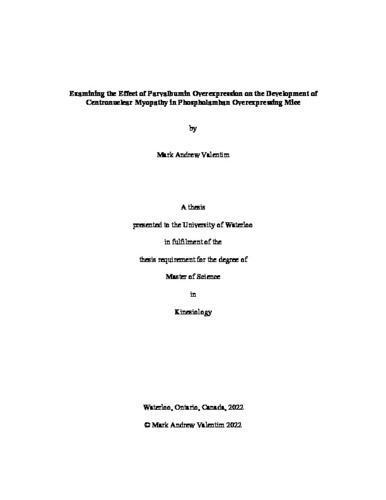 Within the myofibre, the sarco(endo)plasmic reticulum (SR) Ca2+ ATPase (SERCA) has an essential role in regulating intracellular Ca2+ concentrations ([Ca2+]i) by pumping Ca2+ into the SR. There are several known regulators of SERCA, including phospholamban (PLN), an inhibitory protein which binds to SERCA causing a reduction in affinity for Ca2+. Recently, it was discovered that the overexpression of PLN in slow-twitch (type I) muscle fibres results in a disease phenotype resembling centronuclear myopathy (CNM). CNM encompasses a group of diseases which are identified by three main histological characteristics: 1) an increased proportion of centralized nuclei, 2) a centralization of oxidative activity and 3) an increased proportion of type I fibres. Although the pathogenesis of CNM remains unknown, there is evidence that suggests dysfunctional Ca2+ homeostasis may be involved. The involvement of dysfunctional Ca2+ handling is further supported by the CNM-like phenotype developed in PLN overexpressing mice (PLNOE), as the inhibitory action of PLN increases [Ca2+]i. The purpose of this project was to examine the therapeutic potential of overexpressing the cytosolic Ca2+ buffering protein parvalbumin (PV) in PLNOE mice. As a Ca2+ buffering protein, PV binds Ca2+ when [Ca2+]i increases allowing for a faster return to resting concentrations. However, evidence reported in this thesis found the transgenic upregulation of PV did not improve the disease phenotype in PLNOE mice. Specifically, the PV intervention did not reduce the percentage of centralized nuclei, the presence of centralized oxidative activity, and shift toward type I fibres. Furthermore, PV did not improve the reduced soleus weight in the diseased tissue, nor did it improve the reduced cross-sectional area observed in the type I fibres. Functionally, the overexpression of PV did not change the rate of Ca2+ uptake and did not result in improvements in force production. The findings of this thesis suggest a PV intervention to sequester excess cytosolic Ca2+ may not be feasible in treating CNM.

Mark Valentim (2022). Examining the Effect of Parvalbumin Overexpression on the Development of Centronuclear Myopathy in Phospholamban Overexpressing Mice. UWSpace. http://hdl.handle.net/10012/18294