An Intersectional Colour-Blind Frame Analysis of Sports News Coverage on Athlete Activism in the WNBA, NBA, and NHL Following the Shooting of Jacob Blake 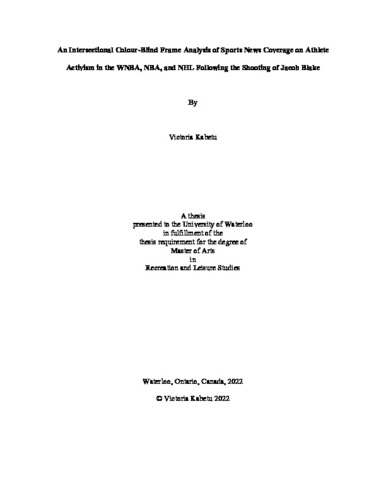 Despite Black women leading the way in athlete activism, there is little research and discussion on their experiences doing so. With the rapid progression of athlete activism in sport, it is important to understand the ways it is currently interpreted and disseminated by sport news entities especially since this is a space Black woman, and women in general, are typically underrepresented. This study analyzed how sport news framed the racial justice protests that occurred in the National Basketball Association (NBA), National Hockey League (NHL), and the Women’s National Basketball Association (WNBA) after a Black man named Jacob Blake was shot and left partly paralyzed by a White police officer in Kenosha, Wisconsin. A framing analysis, anchored in Critical Race Feminism and the five Colour-blind frames offered by Bonilla-Silva (2006) and Jayakumar & Adamian (2017), was conducted to compare 272 articles and 84 league statements written the two weeks after the shooting (August 24 – September 6). The findings show that both articles and league statements discuss the protest, athlete activism, and racial justice in ways that are rooted in the male experience and Whiteness, thus perpetuating inequalities and limiting social progress. Therefore, this study suggests that there is a need for organizational and cultural change within sport journalism, sport leagues, and sport research to effectively represent, fight for, and protect the rights and human dignity of all athletes, staff, and audiences, no matter their gender and race.