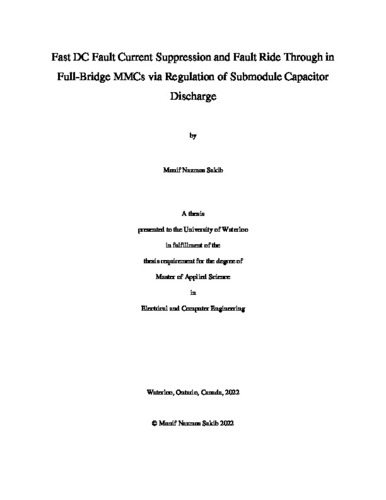 High Voltage Direct Current (HVDC) is more cost-effective than High Voltage Alternating Current (HVAC) for transmitting power over long distances, and therefore is ideal for bulk power transfer from wind, solar, hydroelectric, and tidal power plants located in offshore or remote locations to load centers. The use of Voltage-Sourced Converters (VSCs) in HVDC transmission systems offers greater flexibility when compared to their counterpart, Line Commutated Converters (LCCs), due to their smaller footprint, improved power quality, as well as decoupled active and reactive power control, voltage support, and black start capabilities. The most recent advancements in VSC technology have led to the emergence of a new converter topology known as the Modular Multilevel Converter (MMC). The simplest and most economical MMC cell structure is the Half-Bridge Submodule (HBSM), which is unable to prevent AC side contribution to DC side faults in HVDC systems. Therefore, DC fault protection in the HB-MMC requires either installation of expensive DC Circuit Breakers (DCCBs) or the opening of AC side breakers that are not adequately fast. Adding two extra switches to the HBSM results in the Full-Bridge Submodule (FBSM) configuration which ensures that, in the event of a DC side fault, there is a reverse voltage in the path of AC side current feeding the DC side fault through the antiparallel diodes in the SM switches. In addition, such fault blocking SMs capable of bipolar voltage generation equip the MMCs with Fault Ride Through (FRT) ability, thus allowing them to remain connected to both AC and DC networks during DC faults while operating as Static Compensators (STATCOMs) and exchanging reactive power with the AC network. A comprehensive review of notable fault blocking SM configurations and fault ride through techniques is presented in this thesis. In the event of a DC side fault, the fault current contributions are initially made by SM capacitor discharge, which occurs before the fault is detected, followed by the AC side contribution to the DC side fault. While the AC side currents can be regulated using fault blocking SMs with bipolar voltage generation capability, the initial discharge of the SM capacitors results in high DC fault currents, which can take several milliseconds to be brought under control. A method to actively influence the rate of rise of the DC fault current by regulating the discharge of SM capacitors in an HB-MMC system has been presented in the literature. In this thesis, the approach has been modified and adapted to a FB-MMC system. The discharge direction of the FBSM capacitors is inverted following the detection of a DC side fault which leads to a reversal in the fault current direction and a fast drop-off towards zero. The conventional FRT procedure where the DC fault is cleared by making adjustments to the MMC arm reference voltages followed by STATCOM operation of the MMC is initiated after the detection of zero-crossing of the DC fault current. The proposed control scheme provides significantly faster DC fault current suppression compared to the case where the conventional FRT procedure is initiated immediately upon DC fault detection. Simulations performed on a point-to-point FB-MMC test system are used to verify the theoretical analysis and to evaluate the DC-FRT performance of the proposed scheme.