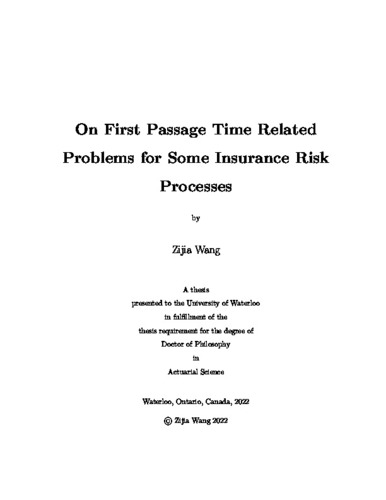 For many decades, the study of ruin theory has long been one of the central topics of interest in insurance risk management. Research in this area has largely focused on analyzing the insurer’s solvency risk, which is essentially a standard first passage time problem. To model the manner in which the claim experience develops over time for a block of insurance business, various stochastic processes have been proposed and studied. Following the pioneer works of Lundberg [88] and Cramér [32], in which the classical compound Poisson model was proposed to model the insurer’s surplus process, there has been a considerable amount of effort devoted to constructing more realistic risk models to better characterize some practical features of the insurer’s surplus cash flows. This thesis aims to contribute to this line of research and enhance our general understanding of an insurer’s solvency risk. In most analyses of the main risk processes in risk theory, the income process is modelled by a deterministic process which accrues at a constant rate per time unit. As we know, this is a rather simplifying assumption which is far from being realistic in the insurance world, but one under which the solvency risk is typically assessed. To investigate the impact of income processes exhibiting a higher degree of variability on an insurer’s solvency risk, the first part of the thesis focuses on analyzing risk models with random income processes. In Chapter 2, we consider a generalized Sparre Andersen risk model with a random income process which renews at claim instants. Under the setting of this particular generalization of the Sparre Andersen risk model, we investigate the impact of income processes on both infinite-time and finite-time ruin quantities. In Chapter 3, we further extend the results of the risk model proposed in Chapter 2 by analyzing a renewal insurance risk model with two-sided jumps and a random income process. Another class of risk models that has drawn considerable interest in risk theory are the spectrally negative Lévy processes. Thanks to the development of the fluctuation theory of Lévy processes, first passage time analysis of Lévy insurance risk models has flourished in the last two decades, both in terms of models proposed and quantities analyzed. For example, risk models with dividends (or tax) payouts and exotic ruin have received considerable attention in the field of insurance mathematics. Leveraging the extensive literature on fluctuation identities for spectrally negative Lévy processes, the second part of the thesis considers some first passage problems in this context. In Chapter 4, we study a refracted Lévy risk model with delayed dividend pullbacks and obtain explicit expressions for two-sided exit identities for the proposed risk process. Chapter 5 introduces two types of random times with the goal of bridging the first and the last passage times’ analyses. The Laplace transforms of these two random times are derived for the class of spectrally negative Lévy processes. To ensure that the thesis flows smoothly, Chapter 1 introduces the background literature and main motivations of this thesis and provides the relevant mathematical preliminaries for the later chapters. Chapter 6 concludes the thesis with some remarks and potential directions for future research.