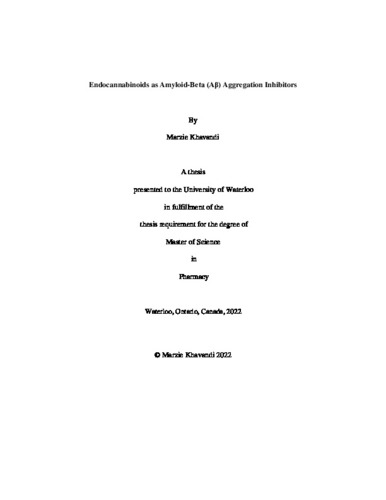 The endocannabinoid system, including endogenous cannabinoids and their corresponding receptors, has received extensive attention in the last few years for their neuroprotective effect in the central nervous system. The regulation and metabolism of these molecules are potential therapeutic targets for neurodegenerative diseases such as Alzheimer's disease, which is characterized by Aβ aggregation-induced cell toxicity, inflammation, tau phosphorylation, disruption of neurotransmitters pathways, mitochondrial dysfunction, and oxidative stress. The endocannabinoids, such as 2-AG, AEA, NADA, noladin, OAE, and their main metabolite, arachidonic acid, may be involved in the multiple neuroprotective effects, including excitotoxicity attenuation, oxidative stress reduction, and inflammation prevention through CB1, CB2 receptors as well as other possible pathways, including inhibition of Aβ oligomer formation via interactions with these toxic peptides. However, the interactions of endocannabinoids with Aβ species and their mechanisms have not been fully explored. Therefore, we hypothesized that endocannabinoids might reduce amyloid β-protein deposition and inhibit neuronal cell death through CB1 or other possible pathways. In vitro experiments, including cell studies using two cell lines (HTT22 and CB1-CHO), ThT based kinetic assay, and TEM studies were used to determine the effects of above mentioned five endocannabinoids, arachidonic acid, and a CB1 antagonist to understand the role of endocannabinoid ligands and pathways involved in Aβ-induced neurotoxicity. The results of this study on HT22 cells showed that some, but not all of the endocannabinoids were able to exhibit neuroprotective effects against Aβ-induced toxicity. However, AM251, as a CB1 receptor antagonist, could not reverse this neuroprotection. On the other hand, AM251 was able to inhibit the protective effects of some, but not all, of the endocannabinoids in CB1-CHO cells.