Tracing the Grotesque: Finding Value in the Urban Villages of Shenzhen 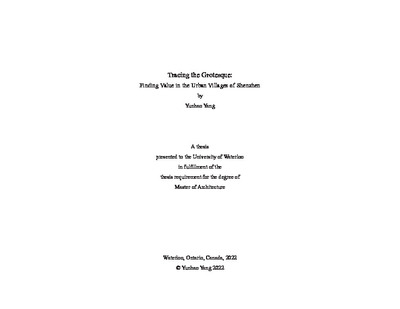 The rapid urbanization, which has happened since the 1979 economic reform, has fundamentally changed Shenzhen, China. The city was developed to be an Economic Zone, so millions of original village houses were demolished and replaced by skyscrapers. However, the still remaining village houses are excluded from the urban planning strategy and they are described as the “dirty, unorganized, bad” Urban Villages. The formally constructed Shenzhen metropolis, which was intended to greatly improve life in Shenzhen through modernization, somehow fails to provide full sense of rootedness to the residents, while the residents who live within urban villages are having surprisingly positive connections with these low-end neighborhoods. So, do the informal and unorganized elements in the Urban Village only imply the sense of chaos and disorder? Can they mean something more? Professionals such as Juan Du and Meng Yan have critiqued that the grotesque Urban Villages are actually called “homes” by millions of immigrants, and the orthodox urban planning strategies for the Shenzhen metropolis do create some negative effects. On the other side, figures such as Jane Jacobs and Jan Gehl state that public spaces are the most noticeable organ which flow throughout a community and these can fundamentally affect individuals’ lives. Thus, this project aims to capture, record, and archive the public spaces within the Urban Village, the goal being to re-assess the spatial experience and try to define the positive attributes. The thesis photographically documents the public spaces in the Urban Village and compares them to the modern commercial housing community in the metropolis region. Furthermore, the thesis includes study diagrams on public spaces’ dimensions and dynamics, and on sociological knowledge that are used to compare and critique these contrasting neighborhoods. This project focuses on researching how different public spaces, in which most of the public activities happen, assist to form different social life. Thus, the following documentation and discussion will exclude the impact from private interior residential space. This thesis project aims to promote inclusion and support the maintenance of the Urban Village type. It also aims to discuss how the design of public space contributes to the wellbeing of residents; how access to public space allows for social inclusion. Lastly the thesis will purpose strategies based on lessons learned from successful aspects of the social life in the Urban Village that could be used towards positive modifications of the commercial housing type.