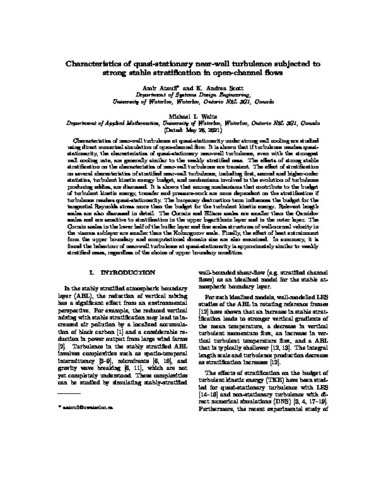 Characteristics of near-wall turbulence at quasistationarity under strong wall cooling are studied using direct numerical simulation of open-channel flow. It is shown that if turbulence reaches quasistationarity, then the characteristics of quasistationary near-wall turbulence, even with the strongest wall cooling rate, are generally similar to the weakly stratified case. The effects of strong stable stratification on the characteristics of near-wall turbulence are transient. The effect of stratification on several characteristics of stratified near-wall turbulence, including first-, second-, and higher-order statistics, turbulent kinetic energy budget, and mechanisms involved in the evolution of turbulence producing eddies, are discussed. It is shown that among mechanisms that contribute to the budget of turbulent kinetic energy, transfer and pressure-work are more dependent on the stratification if turbulence reaches quasistationarity. The buoyancy destruction term influences the budget for the tangential Reynolds stress more than the budget for the turbulent kinetic energy. Relevant length scales are also discussed in detail. The Corrsin and Ellison scales are smaller than the Ozmidov scales and are sensitive to stratification in the upper logarithmic layer and in the outer layer. The Corrsin scales in the lower half of the buffer layer and fine-scale structures of wall-normal velocity in the viscous sublayer are smaller than the Kolmogorov scale. Finally, the effect of heat entrainment from the upper boundary and computational domain size are also examined. In summary, it is found that the behavior of near-wall turbulence at quasistationarity is approximately similar to weakly stratified cases, regardless of the choice of upper boundary condition.