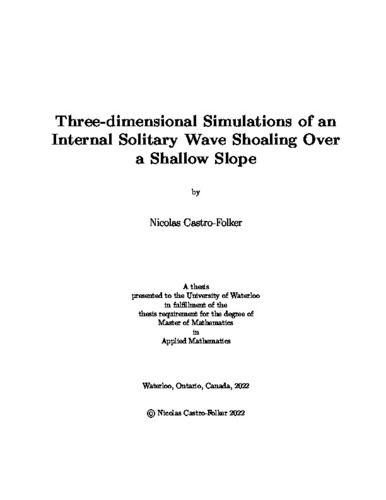 The transport of sediment is vital for ecological and climatological processes. Sediment can either move up the shelf, or mix into the upper water column as nepheloid layers. Internal solitary waves (ISWs) shoaling along sloped beds produce structures and currents that transport sediment. The geometry of the wave and the bed influence the total flux due to this transport, and whether or not the sediment forms nepheloid layers. Both numerical and experimental investigations, at both the field and laboratory scales, have been conducted with the goal of understanding the aforementioned relationship. Though these investigations have a common goal, they approach it from differing perspectives. Some focus on the mechanisms behind the ejection of sediment from the bottom boundary layer (BBL); others focus on the sub-processes of shoaling; some report on the coincidence of sediment and wave events in natural systems; others perform experiments that directly study the interactions between waves and sediment. This thesis describes three-dimensional, laboratory-scale DNS of an internal solitary wave of depression (ISW-D) shoaling over a shallow linear slope $(S\approx 0.05)$; it is primarily concerned with describing the sub-processes of shoaling waves. The amplitude and width of the initial waves are chosen so that the systems remain in the fission regime. An ISW-D in this regime steepens, fissions into a nonlinear wave train, and forms a train of boluses; as the wave does so, it interacts with the BBL to produce instabilities. Each stage has qualitatively different instabilities, though of particular interest are vortices induced by BBL instabilities during wave fission. The initial stages of the shoaling process, and the instigation of pycnocline overturning are found to be two-dimensional. Additionally, once three-dimensionalization does occur, it does so through independent processes during the transition from the fission phase to the bolus phase, and once again during the degeneration of the bolus. Implications for mixing, and sediment advection in coastal contexts are discussed.