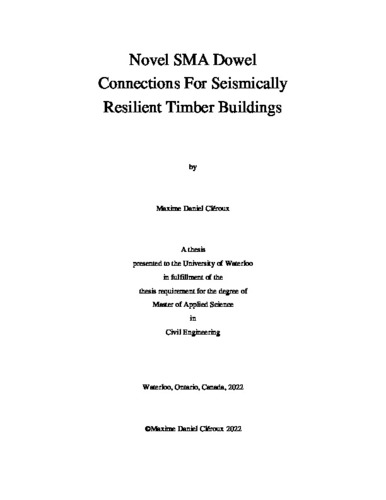 The trend towards sustainable construction practices has led to a growing demand for mid- to high-rise mass timber structures and a growing interest in their behaviour during earthquakes. Due to the brittle nature of wood, timber-based seismic force resisting systems (SFRSs) rely on connections to dissipate energy; these connections effectively act as a ductile energy-dissipative fuse in extreme loading events. Ductile timber connections traditionally fail from a combination of yielding of fasteners and the crushing of wood below the fasteners. While this ensures ductile behaviour, seismic resilience is an increasingly desired trait in SFRSs. Seismically resilient systems seek to reduce or eliminate all disruptions to occupants caused by an earthquake, which can be achieved by designing easily replaceable fuses that absorb permanent damage, or through the design of self-centering systems. Recently, superelastic shape memory alloys (SMAs) have garnered interest in the construction industry for their potential use in resilient self-centering structural systems. Superelasticity is a property which enables a material to recover large strains with no permanent damage. The overarching aim of the current study is to investigate the effectiveness of using superelastic nickel-titanium (NiTi) SMA bars as slender fasteners in timber dowel-type connections to create a self-centering connection for braced timber frames (BTFs). Initially, the self-centering ability of the SMA bars in bending was evaluated by performing cyclic three-point bending tests on the SMA bars. The performance of SMA bars used as straight dowels in a single fastener wood-steel-wood connection was investigated and compared to the behaviour of a traditional steel dowel using the same connection detail. These single dowel tests were modelled in Abaqus, and modelling results showed good agreement with experimental results. Then, the SMA bars were threaded and used in a four-bolt wood-steel-wood connection that was tested in monotonic and cyclic loading. These tests were also performed with traditional ASTM A307 bolts to compare connection behaviour to the current industry standard. The SMA dowel and bolted connections both showed great self-centering abilities and increased strength when compared to connections with traditional steel fasteners. However, the NiTi alloys used in this study showed a tendency to shear suddenly at the wood-steel interface. Additionally, the higher bending strength of the NiTi alloys led to slightly greater wood crushing compared to connections with traditional steel fasteners. While the great self-centering effect of the SMA fasteners show promise for the use of SMAs in connections, it is recommended that further research be conducted on the fatigue behaviour of NiTi dowels in cyclic shear. Additionally, dowel-type fasteners employing a different superelstic alloy, such as iron-based SMAs, should be investigated as they become available. While these alloys are currently still in development, they could be an inexpensive alternative to NiTi with cyclic shear behaviour that is better suited for dowel-type fasteners.