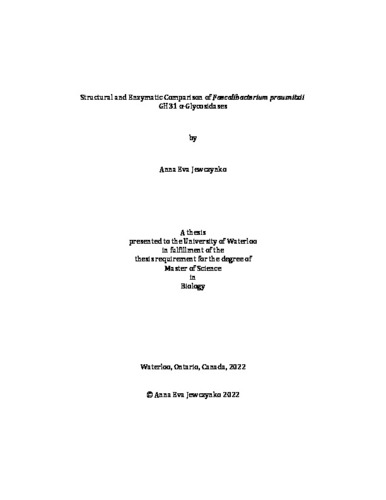 The gut microbiome is home to thousands of species of bacteria, that are essential for human digestion, immunity and physiology. Faecalibacterium prausnitzii makes up about 5% of a healthy human gut microbiome and a lower abundance of this bacterium has been found in patients with IBD and Crohn’s disease. Among an extensive repertoire of carbohydrate active enzymes, F. prausnitzii has 2 GH31 enzymes, which are from the same family as Sucrase-Isomaltase and Maltase-Glucoamylase, human digestive enzymes with overlapping and distinguishing substrate specificities. This thesis aims to characterize the substrate specificity, preference and inhibition sensitivity of F. prausnitzii GH31 α-glucosidases to better understand the structural features of GH31 enzymes and the biological capabilities of these bacteria. In this thesis, AlphaFoldV2.1.0 was used to create computational models of F. prausnitzii α-glucosidases, and the substrate specificity, enzyme kinetics and inhibition parameters are reported. Structurally, these α-glucosidases have the same identified conserved N-terminal and (β/α)8 barrel domains, but FpAG1 has an additional conserved domain of unknown function at the C-terminus which is not found in the FpAG2 structure. Both FpAG1 and FpAG2 have α-glucosidase and oligo-1,6-glucosidase activity. The comparative kinetic studies show that FpAG1 has a greater preference for α-1,6 glycosidic linkages, and FpAG2 has a greater preference for α-1,4 glycosidic linkages. The comparative inhibition studies show that the tested α-glucosidase inhibitors, acarbose, miglitol and kotalanol, are more potent in FpAG2 than FpAG1, and acarbose is a weak inhibitor of F. prausnitzii α-glucosidases. Distinguishing binding affinities of miglitol and kotalanol in these GH31 enzymes suggest structural differences in the FpAG1 and FpaG2 active sites. Gaining insight on the GH31 α-glucosidases as a component of F. prausnitzii metabolism can further our understanding of this community in the human gut microbiome.