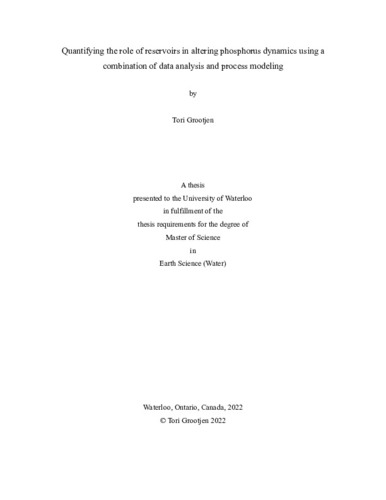 Excess phosphorus (P) from agricultural watersheds promotes eutrophication in downstream aquatic systems. Reservoirs retain P generated from farm fields and protect downstream waters. Reservoirs also act as hotspots for P transformation, as anoxic conditions can facilitate the release of stored P from the lake sediments. The role of inland reservoirs in P speciation at the watershed scale is relatively unexplored. This problem is growing in importance as approximately half of the global river volume is at least moderately impacted by damming, and is projected to reach 93% with all the planned or proposed dams (Grill et al. 2015). Here we use a decade of soluble reactive P (SRP) and total P (TP) concentration data at the inlet and outlet of two reservoirs, Belwood Reservoir and Conestogo Reservoir, in the Grand River Watershed, Canada. The annual SRP and TP percent retention varied at both reservoirs, showing that the reservoirs acted as a sink in some years and as a source in other years. The percent TP retention in Belwood Reservoir varies from -40% to 32%, while percent TP retention in Conestogo Reservoir is generally lower, between -72% to 25%. The SRP retention in Belwood Reservoir varied between -68% and 43%, while SRP retention in Conestogo Reservoir varied between -71% and 28%. Interestingly, the source-sink behaviour is visible for both SRP and TP and they are similar between years. That is, in years that Belwood Reservoir acts as a source of TP, the reservoir often acts as a source of SRP too. At the seasonal scale, we found that both reservoirs increase the proportion of bioavailable P (SRP:TP ratio) from inlet to outlet between April and October. We then built a process-based model to examine the P cycling and sediment-water interactions controlling this speciation of P in the Belwood Reservoir. The model was able to capture downstream SRP export with NSESRP = 0.57-0.86 and TP export with NSETP = 0.60-0.91. The model had difficulty capturing the SRP:TP magnification from inlet to outlet and sediment P accumulation, especially for the first few years of model simulation (2007 - 2012). Model results highlight the role of internal loading during the summer months. As dam construction is on the rise globally, it is critical to understand the impact of reservoirs on the relative reactivity of P in order to mitigate nuisance and potentially harmful algal blooms.