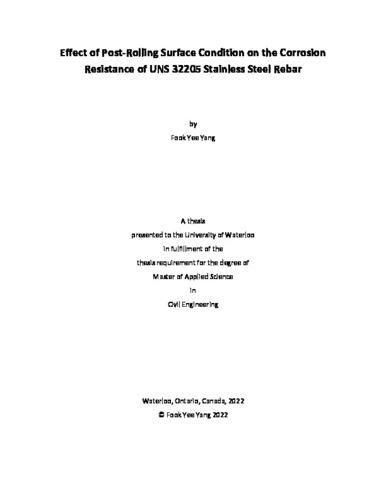 During the winter season, ice accumulation on roads and sidewalks is a major problem and poses a hazard to road users. The most common method of addressing this issue is by applying de-icing salts or spraying a brine solution on road surfaces. Unfortunately, the use of de-icing salts and anti-icing brines has a detrimental effect on concrete infrastructure by causing corrosion of steel reinforcement and deterioration of the concrete matrix. The issue of corrosion can be addressed by using more corrosion resistant material as reinforcement (rebar), such as stainless steel. Currently, the manufacturing process of stainless steel rebar involves a hot rolling process followed by shotblasting to remove mill scale formed during the high temperature rolling process and then acid pickling to remove the chromium depleted layer below the mill scale. Since this process is generally required by many authorities, there is little literature on the effect of mill scale on the corrosion resistance of stainless steel. The main goal for this project is to determine the effect of surface condition due to post-rolling processes on the corrosion performance of UNS 32205 duplex stainless steel rebar. Furthermore, this project examines the condition of the mill scale after exposure to the high pH environment in concrete for an extended time. Four different surface conditions of rebar were tested as part of this project: as-rolled (no treatment), shotblasted-only, pickled-only, and both shotblasted-and-pickled. This project is divided into three parts: rebar surface characterization, a rapid corrosion screening test, and a longer-term corrosion exposure test. Firstly, surface characterization was carried out by optical microscopy, scanning electron microscope (SEM) paired with energy-dispersive X-ray spectroscopy (EDX), and secondary ion mass spectrometry (SIMS). The rapid screening test provides only a qualitative comparison of the corrosion resistance. For this test, six replicate lengths of rebar of each type of surface condition were cast into concrete cylinders. Sodium chloride was dissolved in the mixing water to induce active corrosion. The concrete cylinders were cured for 24 hours before being demoulded and immersed in saturated calcium hydroxide solution. The open circuit potential of the bars was monitored for 24 hours; after which, they were anodically polarized for 96 hours. The current response in the rebar was recorded during this time. Only two of the 30 specimens exhibited active corrosion during the 96 hours of polarization. These were two of the six shotblasted-only bars. There are several possible reasons for the corrosion found in only these bars. Firstly, the shotblasting process was done using carbon steel chips as a medium. Any embedded carbon steel in the mill scale would be more susceptible to corrosion. Secondly, microscopy showed incomplete removal of mill scale from these bars. This would lead to a galvanic effect between areas with mill scale remaining and areas where mill scale had been removed, further aggravating any corrosion. The as-rolled and pickled-only bars exhibited similar corrosion rates to those which were fully treated, i.e., shotblasted-and-pickled bars. This was unexpected because the mill scale was cracked in many places and still had a chromium depleted layer in the underlying steel. These results show that, at least in this test, as-rolled UNS 32205 rebar performs as well as those with conventional post-rolling treatments. For more quantitative data, a modified version of the ASTM A955 macrocell corrosion test was used. In this test, rebar specimens were cast in concrete mortar rectangular blocks with a ponding well. Four replicates of each surface condition were prepared. Saturated calcium hydroxide was added to the ponding well to prevent calcium hydroxide from leaching out and maintaining a high pH environment. After 200 days, 15% sodium chloride solution was added to the ponding well of three replicates in an attempt to initiate corrosion. One replicate of each surface condition was kept without exposure to chlorides to allow observation of the effect of the high pH on the mill scale. Throughout this time, the macrocell potential of the bar was measured. Electrochemical tests were performed periodically to monitor for any corrosion activity. After 440 days, two of the three replicates exposed to chlorides were autopsied to examine the condition of the rebar. None of the bars exhibited active corrosion rates and there were no visible signs of corrosion on the autopsied bars. It was concluded from this test that a 15% sodium chloride solution is insufficient to initiate corrosion in UNS 32205 rebar in any of the surface conditions.