Abandoning Private Femininity: Georgiana, Duchess of Devonshire, the 1784 Westminster Election, and Its Implications for the History of Women in Politics 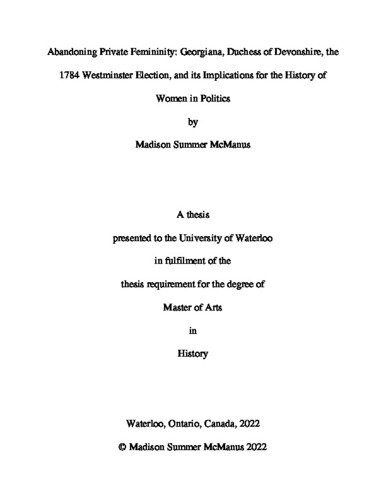 My thesis argues that women had a powerful influence on politics long before the fight for suffrage in the late nineteenth and early twentieth centuries and that the focus in political history on “high politics” has not allowed for women’s less formal involvement in politics to be recognized as it should be. I discuss the socio-political culture of eighteenth-century England, including the nature of the role of women in politics and how it aligns with the social expectations of women during the eighteenth century. I analyze the impact of Georgiana, the Duchess of Devonshire, on the 1784 Westminster election, as well as her prominent role within the Whig party. Finally, I discuss the rise of the newspaper press’s influence on politics in the eighteenth century and how its harsh criticisms of Georgiana played a role in not only causing Georgiana to take a step back from politics, but also reduced the visible activity of women in politics for the next hundred years.

Madison Summer McManus (2022). Abandoning Private Femininity: Georgiana, Duchess of Devonshire, the 1784 Westminster Election, and Its Implications for the History of Women in Politics. UWSpace. http://hdl.handle.net/10012/18179