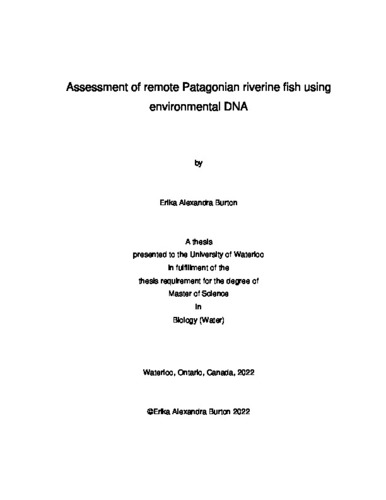 Freshwater systems and fish communities face many anthropogenic threats such as climate change, pollution, and invasive species, causing a rapid loss of biodiversity. To protect freshwater fish basic knowledge of their numbers, distribution, and habitat is required, but can be difficult to obtain. Remote freshwater systems can experience human impacts but are even less understood due to lack of access and potential hazards. Patagonia (the southern tip of South America) is sparsely populated but contains many freshwater systems that can be indirectly impacted by human activities. The introduction and subsequent naturalization of several invasive salmonid species in rivers and lakes. Despite the potential for adverse effects on these ecosystems, they are generally under researched and uncharacterized. One such freshwater environment is the rivers draining from the stratovolcano Melimoyu in northern Chilean Patagonia, where limited access, high flows and considerable river debris makes traditional sampling from boats or wading impractical or dangerous. New biomonitoring techniques such as environmental DNA (eDNA) detection can be used to sensitively and non-invasively obtain data of species presence or even community structure through analysis of water samples and may provide an avenue for obtaining data about freshwater communities in remote systems such as Melimoyu. Applying eDNA barcoding or metabarcoding techniques in remote systems may allow researchers to gain knowledge about the biota in these environments where traditional sampling may be limited or impossible. Environmental DNA barcoding was used for the detection of three different fish species: invasive brown trout (Salmo trutta) and Atlantic salmon (Salmo salar), and native puye (Galaxias maculatus) in the rivers draining Volcán Melimoyu. Brown trout eDNA was detected at seven sites across four rivers, Atlantic salmon eDNA was not detected at any sample sites, and puye eDNA was detected in one river with high certainty. At several sites eDNA detection techniques were accompanied by backpack electrofishing. The detection of brown trout eDNA was potentially influenced by differing environmental conditions (e.g., flow) between sampling events. Puye was not always detected by eDNA despite being collected during electrofishing. eDNA can be a powerful biomonitoring tool for detection of fish in remote systems, especially if applied with consideration of controls for contamination, transport, and storage of samples. Samples for eDNA barcoding can be collected under less-than-ideal conditions, and with an appropriate sampling regime, applied to remote systems to obtain valuable data on distributions of individual fish species. However, in future studies eDNA metabarcoding (i.e., simultaneous detection of all fish eDNA present using universal primers) may be a more powerful tool for use in remote freshwater environments to gain an understanding of entire communities. Collections of supplementary data could be used to inform occupancy models for a better understanding of the eDNA and presence of fish in these freshwater systems. This study demonstrates the potential application of eDNA for informing resource managers about fisheries resources, even in areas where traditional fisheries techniques are difficult or impractical to complete.