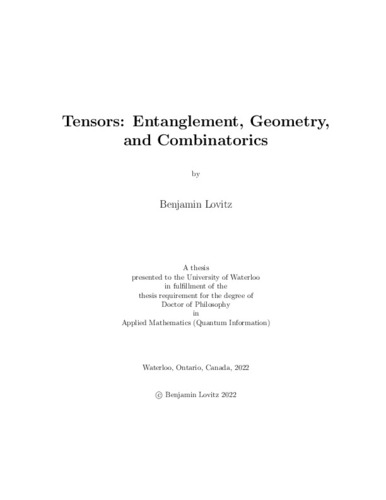 In this thesis, we use algebraic-geometric and combinatorial techniques to study tensor decompositions, with applications in quantum information theory, algebraic complexity theory, and algebraic statistics. A tensor is a multilinear map. These objects naturally generalize matrices, and have many useful applications in math and science. They can be used to describe nearly any dataset, and any pure (or even, mixed) quantum state. A decomposition of a tensor v is an expression of v as a linear combination of ``elementary tensors," which are defined according to the application. For a fixed choice of elementary tensors X, the X-rank of v is the minimum number of elementary tensors needed to span a space containing v. The border X-rank of v is the minimum number of elementary tensors needed to approximate v arbitrarily well. The most common choice of elementary tensors X are the product tensors, and we refer to the X-rank and border X-rank under this choice as simply the rank and border rank, respectively. In quantum information theory, we think of a projective tensor [v] (the projectivization of a tensor v) as a pure quantum state shared by multiple laboratories. Just as matrices are much better understood than multi-way tensors, bipartite entanglement is much better understood than multipartite entanglement. For example, while we know that the most useful state in the bipartite setting under the LOCC paradigm is the canonical maximally entangled state, along with its local unitary equivalents, this question becomes more difficult in the multi-party setting. As a natural recourse, we determine the ``usefulness" of multi-way states for facilitating a particular task: local unambiguous state discrimination. We also study entangled subspaces, entanglement witnesses, and so-called absolutely entangled sets in the multi-way setting. A different set of elementary tensors that are relevant in quantum information are the so-called stabilizer tensors. The stabilizer rank of a pure quantum state [v] represents the computational cost of classically simulating Clifford circuits applied to [v] under the stabilizer formalism. We introduce new techniques from number theory and algebraic geometry for studying the stabilizer rank, and obtain simplified proofs of the best-known lower bounds on stabilizer rank up to a log factor. In algebraic complexity theory, we think of a tensor v as a multilinear map. In this context, the rank of v is a useful barometer for the computational cost of implementing this multilinear map. We prove new lower bounds on tensor rank. In algebraic statistics, we think of a tensor v as a probability vector for multiple (observable) random variables. Under an assumption of conditional independence, a decomposition of v into product tensors corresponds to a choice of latent (unobservable) random variable that gives rise to the observable random variables. If v has a unique tensor rank decomposition, this means that there is only one consistent choice of latent random variable (with the smallest number of outcomes) consistent with the probability vector v. We obtain a new sufficient condition for a given decomposition of v to be the unique rank decomposition of v, strengthening a theorem of Joseph Kruskal.