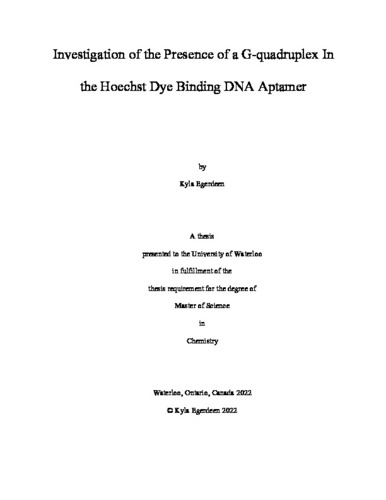 Aptamers are nucleic acid sequences that have been selected to bind to a ligand with high affinity and selectivity. Aptamers have great potential for use in various biotechnological and medical applications but understanding their structure is important to fully maximize their potential. In 2007 Sando et al. selected for an aptamer that targeted a tert-butyl (tBu) Hoechst dye developed in their lab. No formal studies were performed on the aptamer, but the team generated a predicted secondary structure that included a loop-stem element. When this project began, it was noted that the Hoechst DNA aptamer sequence was rich in guanines, creating the potential for the formation of a G-quadruplex structure. The research presented in this thesis aims to provide structural information regarding the Hoechst DNA aptamer. In Chapter 2, various biomolecular methods were used to better characterize the Hoechst DNA aptamer and variations of the Hoechst DNA aptamer. First, computational methods were used to model potential G-quadruplexes. Then, fluorescence was used to prove that the aptamer was binding to its ligand and to determine dissociation constants (Kd). Next, native gels provided evidence that the Hoechst DNA aptamer was forming a multi-stranded structure. Finally, circular dichroism (CD) suggested that the Hoechst DNA aptamer formed a G-quadruplex structure. In Chapter 3 nuclear magnetic resonance (NMR) was employed to gain structural information regarding the DNA aptamer bound to the tBu Hoechst dye. 1D Proton NMR experiments further proved that the DNA aptamer was binding to the tBu Hoechst dye, and further supported the potential presence of a G-quadruplex. Additionally, it was possible to tentatively assign the tBu peaks within the NMR spectra. Future work could provide additional structural information and could eventually lead to the elucidation of a solved structure for the DNA aptamer bound to the tBu Hoechst dye.

Kyla Egerdeen (2022). Investigation of the Presence of a G-quadruplex In the Hoechst Dye Binding DNA Aptamer. UWSpace. http://hdl.handle.net/10012/18162