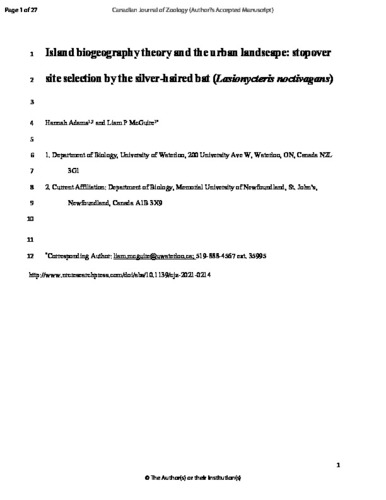 Many migratory bats require forested sites for roosting and foraging along their migration path, but increased urbanization and intensive agricultural practices may reduce the availability of stopover sites. Urban forests may provide important stopover habitat, maintaining landscape connectivity in regions where the majority of natural habitat has been cleared for development. Island biogeography theory can be applied to urbanized temperate forest biomes where small urban forests represent islands separated from the larger “mainland” forest. We used acoustic monitoring during the fall migration period to investigate the use of urban forest habitat by the migratory species Lasionycteris noctivagans Le Conte, 1831. We predicted that recorded activity would have a positive relationship with forest patch area and shape and a negative relationship with isolation from other forest patches, as suggested by island biogeography theory. We observed greater activity at larger forest patches, and although relationships for shape and isolation were not statistically supported the observed patterns were consistent with predictions. Our results demonstrate the need for more in-depth research on the habitat requirements for both migratory and resident bat species and the impact that ongoing urbanization has on local bat populations.