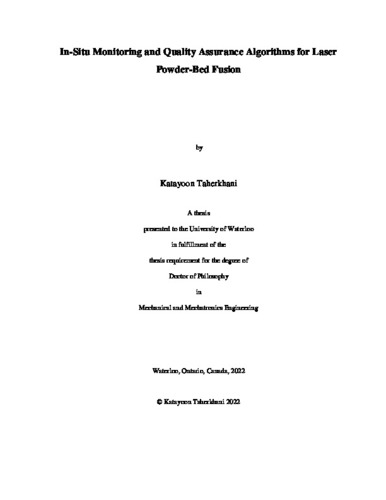 This dissertation describes the development of advanced in-situ defect detection algorithms using analytical and machine learning methods, followed by intermittent control systems to minimize the number of defects in parts fabricated by a commercial laser powder bed fusion (LPBF) system. To detect pores initiated from the lack-of-fusion phenomenon, light intensity emitted from the melt pool is measured by in-situ photodiode-based monitoring systems and then analyzed by multiple analytical methods, including Absolute Limits (AL), Signal Dynamics (SD), and Short-Term Fluctuations (STF). In addition, a customized Self-Organizing Map (SOM) algorithm, an unsupervised machine learning method, is developed for the same purpose. To calibrate and validate the detection methods, two sets of experiments are devised. The first set includes parts with embedded micro-voids to purposefully mimic the lack-of-fusion in parts composed of Hastelloy-X to assess the sensor response and customize algorithms in terms of required thresholds, data size, etc. The second set includes parts with stochastic/randomized pores, induced normally due to the process disturbances, to evaluate the effectiveness of the detection algorithms in the regular print. The printed samples are CT-scanned, and the data from both sets of experiments are analyzed by the segmentation method to examine the correlation. The results of the intentionally seeded defects demonstrate that voids larger than 120 μm are detectable by the AL algorithm, while the 100 μm void size is detectable by the SOM algorithm. The evaluation matrices are further used to validate stochastic/randomized distributions of pores at different process parameters, including relatively low laser powers of 175, 150, 125, and 100 W, high hatching distances of 110, 130, and 150 μm, and process speeds of 1100, 1300, and 1500 mm/sec. The results reveal that the pores created by low laser power are predicted with the True Positive (TP) rate of >75% by SOM and <30% by AL. However, the SOM exhibits TP rate results similar to those of AL in identifying pores induced due to high hatching distances and high speeds, whereas the SOM improves the True Negative (TN) rates up to 31% and 20% for such samples, respectively. Additionally, the SOM demonstrates the improvement in computational speed when it computes the defects per layer 86% faster than AL. The SOM algorithm is integrated with a close-loop control system in an intermittent fashion when the laser power is intelligently increased in the successive layer and on top of the defective zone to heal the induced defects. To this end, the defects predicted by the SOM are clustered in a specific area of each layer using the K-means algorithm. The optimized area around the center of defects is the position at which the laser power should be changed in the following deposition layer. To identify the optimum vi laser power value, various artificial voids are designed and embedded in the coupon samples. Then, a capping layer on the artificial voids is manufactured by increasing the laser power from the nominal value. Based on the optimum power and defect size, knowledge-based rules are defined to increase the laser power in the successive layer to consequently heal the defects created during the process. The new laser power value is calculated in a Laser Correction File (LCF) after the deposition of each layer. This closed-loop approach needs a Message Queuing Telemetry Transport (MQTT) broker to connect data acquisition, data correction, defect detection algorithm, LCF calculation, and the actuator (e.g., laser in this case). The controller is applied to two new sets of experiments to evaluate its performance. Its performance shows that the part density can substantially be increased when the controller is on compared to the printed parts when the controller is off.