An Investigation of Phosphorous-Based Bioconjugation Techniques for Protein Modification 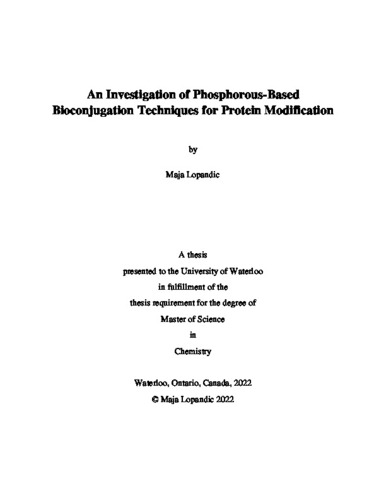 Bioconjugation is a powerful technique allowing for the modification of biomolecules such as proteins. Exposed amino acid residues on the surface of proteins act as chemical handles for the attachment of biomolecules or synthetic compounds including polymers, therapeutic agents, and fluorophores. Protein conjugates are commonly employed in drug delivery applications, as molecular probes, and in the assembly of biosensors and biomaterials. As these designs become increasingly complex, new bioconjugation chemistries are needed. In this thesis, novel phosphorous-based bioconjugation techniques were investigated. The phospha-Michael addition and Wittig reactions were the basis of the studied approaches. The reaction of triphenylphosphine (TPP) and tris(2-carboxyethyl)phosphine (TCEP) with maleimide results in the formation of a phosphonium adduct. These adducts were further used in the Wittig reaction involving aldehydes containing unique chemical moieties. A polymer-bound TPP resin was also successfully employed in the solid phase organic synthesis of Wittig olefin bioconjugation reagents using maleimide and an assortment of aldehydes for protein modification. Several functionalized polymer-supported resins were used in a chromatography-free purification protocol for these reagents. Five different activated ester Wittig olefin reagents were successfully synthesized and purified with the solid phase approach. These reagents target residues containing primary amines. Each reagent was successfully attached to the surface of bovine carbonic anhydrase, the model protein. Electrospray ionization mass spectrometry (ESI MS) was used to detect these conjugates. An amine-functionalized Wittig olefin reagent was synthesized with the solid phase approach for the site-selective transglutaminase mediated modification of apomyoglobin. As the apomyoglobin-Wittig olefin conjugate was not detected by ESI MS, future studies will focus on the design of an appropriate Wittig olefin substrate for transglutaminase. It is contemplated that the strategies demonstrated herein may allow for the synthesis of new molecular probes and therapeutic drug molecules for biomolecular applications. Additionally, the immobilization of enzymes onto solid surfaces and polymer-supported resins using our method may also be employed in the fabrication of novel catalytic biomaterials.