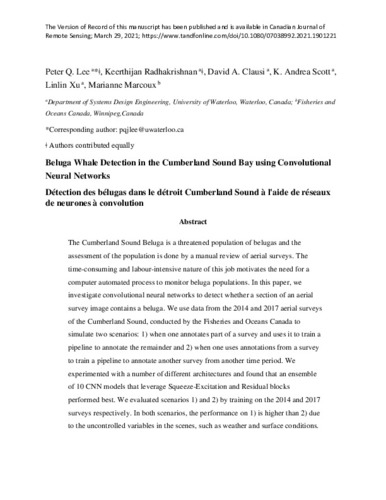 The Cumberland Sound Beluga is a threatened population of belugas and the assessment of the population is done by a manual review of aerial surveys. The time-consuming and labour-intensive nature of this job motivates the need for a computer automated process to monitor beluga populations. In this paper, we investigate convolutional neural networks to detect whether a section of an aerial survey image contains a beluga. We use data from the 2014 and 2017 aerial surveys of the Cumberland Sound, conducted by the Fisheries and Oceans Canada to simulate two scenarios: 1) when one annotates part of a survey and uses it to train a pipeline to annotate the remainder and 2) when one uses annotations from a survey to train a pipeline to annotate another survey from another time period. We experimented with a number of different architectures and found that an ensemble of 10 CNN models that leverage Squeeze-Excitation and Residual blocks performed best. We evaluated scenarios 1) and 2) by training on the 2014 and 2017 surveys respectively. In both scenarios, the performance on 1) is higher than 2) due to the uncontrolled variables in the scenes, such as weather and surface conditions.