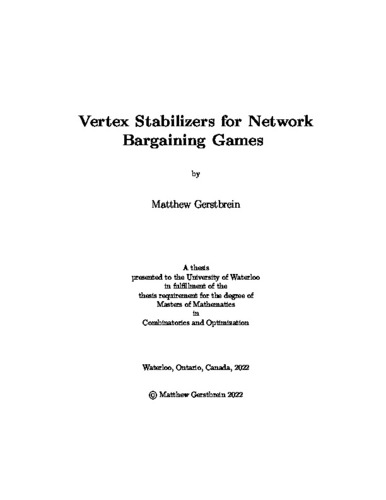 Network bargaining games form a prominent class of examples of game theory problems defined on graphs, where vertices represent players, and edges represent their possible interactions. An instance of a \emph{network bargaining game} is given by a graph $G = (V, E)$ with edge weights $w \in \mathbb{R}^E_{+}$ and vertex capacities $c \in \mathbb{Z}^V_+$. A \emph{solution} to an instance $(G, w, c)$ of a network bargaining game is data $(M, z)$, where $M \subset E$ is a $c$-matching, and $z \in \mathbb{R}^{2E}_{\geq 0}$ is a vector which assigns each edge $uv \in E$ a pair of values $z_{uv}$ and $z_{vu}$, such that $z_{uv} + z_{vu} = w_{uv}$ if $uv \in M$, and $z_{uv} = z_{vu} = 0$ otherwise. An instance $(G, w, c)$ is said to be \emph{stable} if it admits a so-called `stable' solution, which represents a solution where a player has no incentive to deviate. Not all instances of a network bargaining game have a stable solution, and this naturally motivates the problem of how to modify the underlying graph such that the instance becomes stable. In recent years, researchers have investigated various modifications, typically by adding or removing edges or vertices. The natural algorithmic question which stems from this is whether these modifications can be performed efficiently. The answer varies, depending on the modification in question, and on whether the edges/vertices have been restricted to be unit weight/capacity. In this work, we consider the vertex-removal setting for a general instance $(G, w, c)$ of a network bargaining game. A set of vertices whose deletion from $G$ results in a stable instance of the induced network bargaining game is called a \emph{vertex stabilizer}. We demonstrate in this work that the algorithmic problem of finding a minimum cardinality vertex stabilizer is $NP$-complete, and give an efficient $2$-approximation algorithm. Further, we show that no efficient $(2 - \epsilon)$-approximation for this problem exists for any $\epsilon > 0$, assuming the Unique Games Conjecture holds. These results hold even in the case when all edges are of unit-weight. In contrast, if we are given an instance $(G, w, c)$ together with a maximum weight $c$-matching $M$, we show that the problem of finding a minimum cardinality vertex stabilizer that avoids $M$ can be solved efficiently. We provide a polynomial time algorithm for solving this problem.