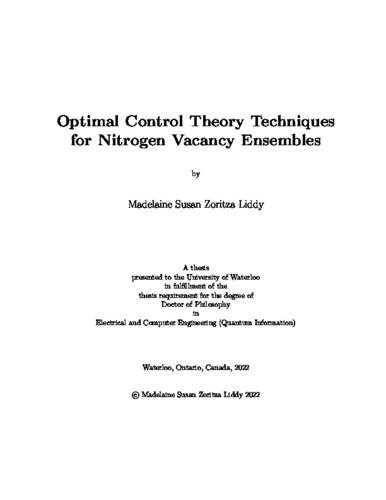 Nitrogen Vacancy (NV) centers have been used for many quantum sensing and navigation based applications. A diamond NV sensor with enhanced sensitivity through an ensemble measurement, and the ability to coherently and independently control each of the four defect orientations provides an efficient building block for these applications. Use of all orientations in the ensemble, naturally aligned perfectly in the crystal, increases the information content compared to using only one orientation. Selective control of each orientation allows for vector quantities to be explored in parallel, reducing measurement times. Optimal Control Theory (OCT) techniques, implemented with helical microwave control fields allow for both of these to be achieved in a setup that is compatible with a future compact sensing device. This thesis details the theory, build, and implementation of OCT control with NV ensembles, laying the ground work for such future devices. The first part of this thesis introduces some general applications of NV ensembles and presents current solutions for controlling all four orientations. This is followed by a brief introduction to the Nitrogen Vacancy center, including the energy level and Hamiltonians relevant to this work. The main body consists of three parts. The first part develops a generalized Hamiltonian model dependent on both the orientation and microwave control field configuration for any NV orientation in three single crystal diamonds. This model is then integrated with OCT pulses, and simulates key examples to show its applications across (100), (110) and (111) single crystal diamonds with the same experimental configuration for both collective and selective control over all four NV orientations. Second, the thesis details the design, build and characterization of the experimental apparatus required for measuring ensembles of NV centers and to implement the necessary microwave controls for OCT experiments. The last part consists of a set of characterization experiments to learn the spin dynamics of NV ensembles and collect the necessary parameters needed to implement OCT pulses. This is followed by a demonstration of selective transitions with OCT pulses that optimize over the four orientations in a (100) diamond, in the absence of a static magnetic field, and removing the geometric constraint of the active NV ensembles located relative to the microwave microstrips.