Integration of Scheduling and Control for Chemical Batch Plants under Stochastic Uncertainty: A Back-off Approach 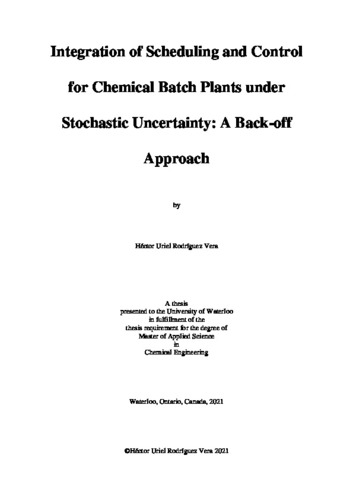 Due to competitiveness in the chemical industrial sector, methodologies must be developed for an optimal programming of activities of a plant and a safe operation of its equipment. The formulation of a problem that involves the scheduling layer and control layer of the hierarchical manufacturing process results in a very complex model as each layer aims to satisfy different objectives and has specific constraints. Historically, in order to reduce the complexity of the model, each layer was considered as an individual problem, with assumptions that neglected phenomena that was observed in real processes. Thus, the solutions would seem economically attractive at first glance, but very difficult to implement in the practice due to a high level of information incoherence between the inter-phase variables. Consequently, methodologies that integrate the scheduling layer and the control layer need to be developed while considering aspects that may emerge during operation such as model uncertainty or plant-model mismatch. In this work, two back-off methodologies are presented to address Mixed Integer Dynamic Optimization (MIDO) formulations that arise when modeling the scheduling and control of flow-shop batch plants under stochastic parametric uncertainty. The core idea of the methodologies is to generate scheduling decisions, find control decisions and determine unit operation times that offer dynamic feasibility in the presence of stochastic parametric uncertainty. The MIDO problem is decomposed into a set of problems, with the aim to reduce the required computational time necessary to solve a full fletched MIDO formulation. The set of problems is then solved iteratively. The first methodology (Algorithm A) decomposes the MIDO problem into a scheduling problem, a dynamic optimization problem, a set of dynamic feasibility problems (dynamic feasibility test) and a unit time operation minimization problem. Since Algorithm A is limited by the sequential calculation of control decisions and unit operation times and that the scheduling does not accurately reflect the back-off dynamics of the system, a second algorithm (Algorithm B) was developed to address these issues. This algorithm decomposes the MIDO problem into a parametric sensitivity analysis, a scheduling problem, a dynamic optimization problem and a set of dynamic feasibility problems (dynamic feasibility test). The parametric sensitivity analysis is performed to create correlations that will allow the scheduling problem to consider the back-off dynamics of the system. Back-off terms are introduced in the model constraints of the dynamic optimization problem to represent the variability of the system caused by the uncertainty. Stochastic uncertainty is modeled using statistical distribution functions and are embedded in the set of dynamic feasibility problems to test the dynamic feasibility of the optimal control actions under random realizations in the uncertain parameters. The variability in the observed variables caused by the uncertain parameters while performing the dynamic feasibility test are used to calculate the back-off terms. To appreciate and evaluate the effect of the variations in the unit operations times caused by the back-off effect, in the scheduling problem, a continuous-time formulation has been considered and implemented. A case study featuring a flow-shop batch plant consisting of two dynamic reaction processes and two steady state separation processes is used to illustrate the benefits and limitations of the proposed back-off methodologies. An scenario consisting of a one unit available per process was use to compare Algorithm A with the methodology developed by Yael-Alvarez & Ricardez-Sandoval1. The results show that considering varying unit operation times in the back-off methodology increments the computational effort, but the economics of the are improved up to a 42%. Algorithm B was evaluated using scenarios to measure the effects of varying the value of variability considered in the back-off terms and the effects of having multiple available units with different processing capacities. The results show that the amount of variability considered in a back-off term may improve the profits up to a 22% per scheduled job compared to a nominal case (no back-off terms). Due to the stochastic nature of the uncertainty propagation models, only solutions that offer dynamic feasibility under uncertainty are assured. In general, unit operation times chosen from optimization are better suited to accommodate stochastic parametric uncertainty while the control actions enforce process operational and product quality constraints at reasonable economic costs. Hence, the two methods proposed in this work have the potential of addressing optimal scheduling and control problems under stochastic realizations in flow-shop batch plants.