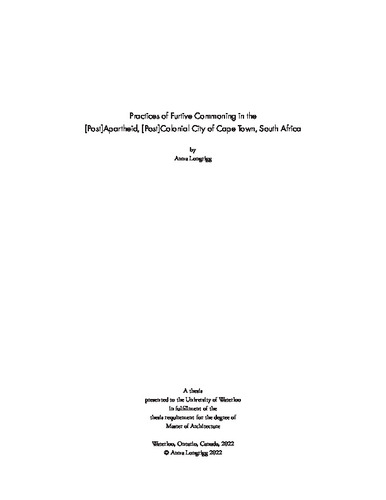 Contemporary neoliberal policies in Cape Town, South Africa repeat and perpetuate colonial and apartheid era patterns of socio-spatial segregation. These patterns result in the sustained quiet encroachment of informal settlements from the periphery and the emanating silent enclosure of valuable land from the city centre. The consequence is a furtive battle of the commons; an understated and often inaudible competition for open space. While the poor and historically oppressed strive to live dignified lives in the city by creating and occupying informal precarious commons, the white and wealthy increasingly fortify and secure public land into gated communities and City Improvement Districts (CIDs). These anemic commons, attempt to mitigate the white fear of the ‘other’, and to achieve the ‘utopian’ lifestyle promised during apartheid. This thesis explores the inaudibility of this furtive commoning as a strategy for both fugitivity and survival, as well as control and evasion. Through analyzing, drawing, and photographing the often understated occupation patterns within the urban fabric of Cape Town, my work brings an architectural and spatial perspective to a topic often tackled by sociologists, political theorists, and planners. In the investigation of both the silent enclosure of the anemic commons and quiet encroachment of the precarious commons, and the mapping of relationships between them, I will paint a picture of how these seemingly disparate architectural practices, are working against one another, despite their common goals of home, security, and family life. The ambition of my thesis is; to draw attention to the role of the citizen in conjunction with state policy and policing in shaping the city and its divides, and to illustrate how race, class, and privilege grant some citizens more voice, power, and security in the process.