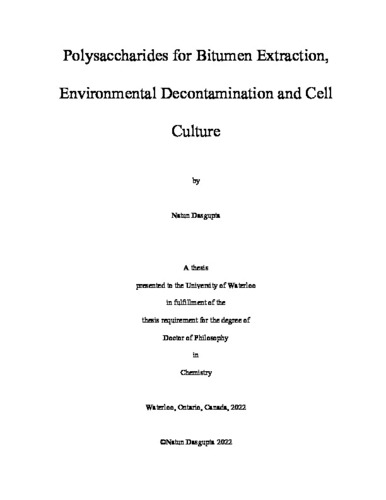 Polysaccharides are polymeric carbohydrates with long chains of monosaccharide units linked by glycosidic bonds. Some of the most prevalent polysaccharides in nature include starch and chitin. For the work reported in this thesis, amylopectin was used either in nanoparticle (fragmented) or cooked forms, while chitin was used in its deacetylated (chitosan) form. The work focuses on developing synthetic techniques to chemically modify starch and chitosan for bitumen extraction, dye degradation, and cell growth and extraction. Starch nanoparticles (SNPs) were modified with carbon disulfide in the presence of NaOH to form xanthated SNPs, which were reacted with methyl-2-bromopropionate to form novel starch-based RAFT (reversible addition-fragmentation chain transfer) macroinitiators with different degrees of substitution (DS). The starch-based RAFT agents were then used to graft thermoresponsive poly(di(ethylene glycol) methyl ether methacrylate) (PMEO2MA) onto the SNPs. RAFT polymerization was found to be an efficient method for the synthesis of thermoresponsive polymer-grafted SNPs, providing straightforward control over the number and length of grafted PMEO2MA segments, as well as the hydrophilic-lipophilic balance (HLB) of the nanoparticles in solution. Temperature-dependent solubility of the PMEO2MA-grafted SNPs was observed, as the SNPs were amphiphilic above their lower critical aggregation temperature (LCAT), forming micellar aggregates dispersed in water that were useful to extract bitumen from the sand and silt components in oil sands. The optimal SNP-g-PMEO2MA composition, structure, and concentration were determined through cycles of bitumen extraction. The addition of 0.5 M NaCl was shown to minimize the interference of fines with the extraction process, increasing the bitumen extraction efficiency to ~80% under optimal conditions. In another application, starch was used to stabilize iron nanoparticles serving in the Fenton reaction. The photocatalytic Fenton reaction uses hydrogen peroxide and Fe2+ under relatively acidic conditions (pH 2-3) to produce hydroxyl radicals as strong oxidant. The low pH, used partly to maintain solubility of the iron catalyst, is problematic because it leads to the generation of large volumes of decontaminated, yet very acidic water. Cooked starch, being hydrophilic, was investigated as a colloidal stabilizer for iron (Fe2+/Fe3+) oxide nanoparticles. The photocatalytic Fenton reaction, investigated at a pH significantly higher than usual (pH 4), enabled the efficient degradation of methylene blue. It was shown that the starch-stabilized catalysts could be reused in several degradation cycles, thereby providing an environment-friendly and cost-effective method to degrade residual dyes in water. PMEO2MA chains were also grown from chitosan films modified with RAFT-active sites of the same type used for the SNPs, thus making the chitosan films thermoresponsive. The length of the grafted PMEO2MA chains was controlled by varying the degree of substitution (DS) of the chitosan-based RAFT agent and the amount of monomer added in the grafting reaction, as determined by gel permeation chromatography (GPC) analysis of the chains cleaved from the chitosan substrates. The growth of cells on the films and their detachment at low temperatures were confirmed in cell growth studies combined with fluorescence microscopy. The reported results demonstrate that the hydroxyl groups of amylopectin starch and chitosan can be utilized to obtain novel materials useful in different application areas.