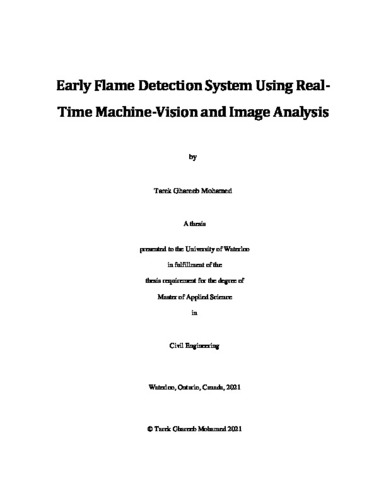 From 2010 to 2019, 110,811 fires with losses have been reported to the Office of Fire Marshall and Emergency Management in Ontario. In The USA, the local fire departments responded to 1,338,500 fires in 2020. These fires caused 3,500 civilian deaths, 15,200 civilian injuries and $21.9 billion in property damage. A fire occurs in a structure in the USA every 64 seconds. Those and similar recent statistics from different parts of the world indicate that the current point-type fire detection technology has failed to eliminate the hazards of death, injury, and economic loss caused by fire. This research aims to utilize the latest digital video processing and computer vision technology to develop a more efficient flame detection system. Due to rapid developments in digital Cameras, IoT, and 5G telecommunication technologies, computer-vision based fire detection is getting more attention from researchers in recent years. Computer-vision based fire detection can be as simple as a single IoT camera to detect a fire early before becoming out of control and turning into a threatening risk, triggers a local alarm, and sends remote warning signals to the fire department and emergency management officials. The proposed system does not require high capital costs nor high operation and maintenance costs since it will run on top of the existing infrastructure of the digital security & surveillance system network. Moreover, the proposed system has broad potential for indoor and outdoor applications in urban areas, and it is easily expandable by adding more IP cameras to the existing network. The proposed system incorporates two stages: Stage-I: Detecting the fire candidate region from live video stream based on colour and motion information; and Stage-II: passing the candidate region to a trained Convolutional Neural Network (CNN) classification model to classify the region as fire or non-fire. The main innovation in this approach is its simplicity and suitability for real-time use without compromising the accuracy. The experimental results show that the system training and validation accuracies reach 100% and 98% respectively. Applying the proposed framework as an additional layer of protection integrated into existing indoor and outdoor digital security & surveillance systems is expected to provide early fire detection and allows firefighters and rescue teams to arrive at the scene at its early and offer priceless minutes to the attendees or building occupants to evacuate the hazardous locations. This proposal will save lives and minimize the economic loss in public and private properties.