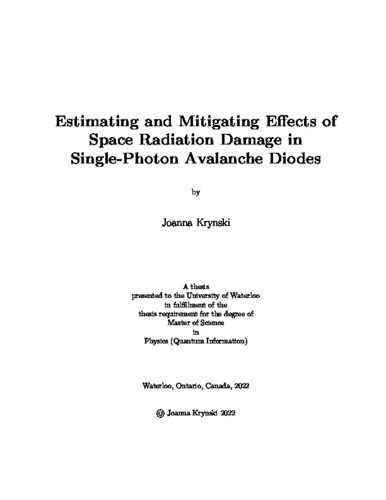 Satellite-based quantum key distribution necessitates practical and robust detectors capable of withstanding the harsh environment of space. Single-photon avalanche diodes (SPADs) have been shown to fulfill the required criteria, especially with their excellent detection characteristics and easy of integration. However, these detection characteristic can be degraded when exposed to space radiation. While there is a significant number of studies on the radiation hardness of Silicon based SPADs, there is little information available for such detectors with an Indium-Gallium-Arsenide (InGaAs) substrate. Here, we present results of a ground radiation test of commercial-off-the-shelf InGaAs SPADs in the context of their viability in future satellite-based QKD applications. The expected radiation over the lifetime of such a satellite is modelled using the open-source European Space Agency Space Environment Information System (SPENVIS). Orbit altitudes, solar cycle period and detector substrates are varied to model the expected damage equivalent to 100 MeV protons. The results of the modelling are used to draw a ground radiation testing plan for eight InGaAs-based SPADs with a final target fluence amounting to 10-years in low-Earth orbit. The SPADs' characteristics (breakdown voltage, current-voltage curve and dark count rate) are measured before and after each radiation step. We find that breakdown voltage and the current-voltage curve does not change significantly, but dark count rate is elevated in most devices, albeit with variability between SPAD devices. Later measurements reveal that detector efficiency also decreases after radiation exposure. In a separate study, we explore using the method of laser annealing to reduce radiation-induce dark count rate in highly irradiated silicon SPADs. We expose previously irradiated detectors to various annealing powers ranging from 50 mW to 2.3 W, as well as at various annealing duration, from 10 s to 16 min. We find no significant dark count rate reduction occurred below 1 W, and employment of higher annealing power leads to steeper decreases in dark count rate. Annealing duration plays a smaller role in dark count rate, with exposures as short as 10 s able to incur some alleviation of elevated dark count rate when coupled with a high annealing power. Results of these two studies can be applied to estimate the feasibility of use of InGaAs SPADs in the space environment, as well as create annealing protocols for mitigation of radiation-induced dark count rate in future space-based quantum experiment requiring the use of SPADs.