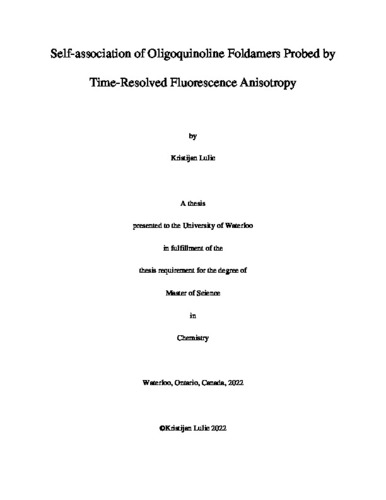 The self-associations of oligoquinoline-based foldamers (OPV-QₙA with n = 4, 8, 17, and 33) terminated at one end with a carboxylic acid (A) and at the other end with the fluorescent dye oligo(phenylene vinylene) (OPV) with themselves, the octadecaquinoline Q₁₆A terminated with one carboxylic acid, and the AQ₂PQ₂A monomer made of a central pyridine flanked on each side by a quinoline dyad terminated with a carboxylic acid have been characterized in solution by time-resolved fluorescence anisotropy (TRFA). Complexation of the acid-terminated constructs was induced by the addition of 0.1 g of 16 M sodium hydroxide aqueous solution to the foldamer solutions in chloroform. Dimerization of the OPV-QₙA foldamers and the complexation of OPV-Q₈A with Q₁₆A followed a close association mechanism. Complexation of OPV-Q₈A with AQ₂PQ₂A occurred through an open association mechanism. Measurements were conducted on the solutions before and after addition of NaOH. Each sample was analyzed by UV-Visible absorption to determine the concentration of the species in solution and by TRFA to determine the average rotational time <ϕ> of the unassociated and associated OPV-QnA foldamers across concentrations spanning 5 orders of magnitudes in some cases. Plots of <ϕ> as a function of acid group concentration for the dimerization of the OPV-QₙA samples and complexation of OPV-Q₈A with Q₁₆A indicated that <ϕ> increased with increasing foldamer concentration, exclusively after addition of 16 M NaOH(aq). <ϕ> reached a plateau at high foldamer concentrations, indicative of a closed association mechanism. The increase in <ϕ> with increasing foldamer concentration reflected the association of the foldamers into larger objects. A plot of the <ϕ> values obtained in the high concentration plateaus, which were expected to represent foldamer dimerization, as a function of the number of quinoline units (NU) for the corresponding foldamer dimer, yielded a straight line, whose slope was the same as the slope of the straight line obtained by plotting <ϕ> of the unassociated foldamers as a function of their NU. This result was taken as evidence that complexation of the OPV-QₙA foldamers resulted in their dimerization. The <ϕ>-vs-[foldamer] profiles could be analyzed to determine the equilibrium constants K for these complexations. Large K⁻¹ values of 1.0 (±0.2)×10⁶ M⁻¹ were obtained which were similar in magnitude to those reported for other self-assembling systems, although the shortest foldamer made of four quinoline units had an equilibrium constant of 1.1 (±0.1)×10⁵ M⁻¹, that was one order of magnitude lower than its longer counterparts. The same methodology was then applied to investigate the complexation between AQ₂PQ₂A and OPV-Q₈A acting as a fluorescent stopper. Mixtures of AQ₂PQ₂A and OPV-Q₈A were analyzed by UV-Visible absorption to determine the concentration of both species in solution. These experiments led to the conclusion, that complexation of AQ₂PQ₂A under basic conditions resulted in hypochromicity due to aromatic stacking of the end-quinoline units of AQ₂PQ₂A. This observation suggested that upon complexation, AQ₂PQ₂A would form linear chains rather than random aggregates. TRFA was applied to determine the average rotational time <ϕ> of the products obtained from mixtures of either 1 µM or 10 µM OPV-Q₈A with varying concentrations of AQ₂PQ₂A. The trends obtained for <ϕ> as a function of the [AQ₂PQ₂A]/[OPV-Q₈A] ratio displayed an exponential increase at high foldamer concentration, indicative of an open association mechanism. Further analysis of these trends yielded the equilibrium constant, which was half that obtained for the dimerization of the longer OPV-QₙA with n = 8, 17, and 33, but four times larger than that of OPV-Q₄A. The complexation between AQ₂PQ₂A and OPV-Q₈A is reminiscent of a condensation polymerization, leading to the formation of many products with a broad size distribution, taking an average size similar to that of the longest oligoquinoline foldamer synthesized to date by conventional techniques. Consequently, the experiments described in this thesis demonstrate that large foldamers can be generated through the self-association of smaller specially designed molecules in solution.