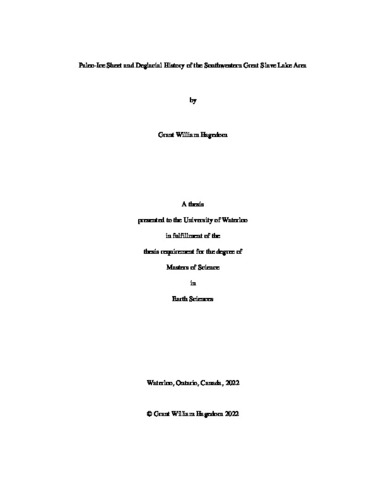 The western Laurentide Ice Sheet (LIS) is known to have experienced complex ice-flow shifts during the last glaciation due to ice divide migration and increasing topographic influence during deglaciation. Several glacial lakes also developed at different elevations during ice margin retreat over the region. However, due to limited field-based studies and surficial mapping, the evolution of the western LIS is still poorly constrained. Improving reconstructions of the western LIS evolution and understanding its net effect on landscapes and surficial sediments can provide important insights into long-term glacial processes, as well as useful knowledge for mineral exploration in glaciated terrains. Furthermore, detailing retreat over this region can help refine continental-scale ice sheet models and help test suggested meltwater drainage pathways to the northwest down the Mackenzie River Valley, which have important implications in paleoclimatology. This research details relative ice-flow chronology and associated till stratigraphy and provides a reconstruction of ice margin retreat and glacial lake positions along a portion of the western LIS situated west of Great Slave Lake, in the Northwest Territories. Relative ice-flow chronology is established using glacial landforms, outcrop-scale ice-flow indicators, as well as till stratigraphic and provenance analyses. Outcrop-scale indicators show a shift in ice-flow direction from an oldest southwestern (230°) flow, to a western (250°) flow, to a final northwestern (305°) flow. This sequence counters the simple westward flow of other studies and suggests a younger rather than older northwestward ice-flow. Lodged boulders and till clast fabrics from till stratigraphic sections across the study area are broadly consistent with the clockwise ice-flow shift up the stratigraphic column. Indicators of northeast provenance include Canadian Shield (igneous and metamorphic) clasts that are in higher proportions than Mesozoic mudrocks and Paleozoic carbonate rocks that underlie the study area. Major oxides, from till matrix geochemistry, are enriched in metals (SiO2-Al2O3-Fe2O3-K2O-TiO2-Cr2O3) interpreted to indicate a northeast Canadian Shield provenance, however, there is overlap with the geochemical signature of the Mesozoic mudrocks. At least one till unit is associated to the oldest southwest ice-flow phase initially recognized in the striation and landform records based on its compositional signature as well as till fabrics. Younger tills were deposited during the clockwise ice flow shift. These tills are located at surface in lower topographic regions throughout the study area and their composition has an increased carbonate signature from the underlying Paleozoic sedimentary rocks. These tills show some compositional inheritance from the older till unit(s). Within these upper tills is a unit sourced from hyper-saline beds to the northeast. Ultimately, the clockwise rotation of ice flow is preserved in both the erosional (landform and outcrop-scale ice-flow indicators) and depositional (till fabrics and composition) records. The ice-flow chronology shows compelling evidence for major shifts in ice sheet configuration and flow dynamics, as well as related subglacial conditions (e.g. changes in subglacial sediment entrainment) during the last glaciation. A retreat sequence showing ice margins and pro-glacial lake positions is established using sediment landform assemblages from surficial maps and topographic basins and drainage outlets from the 2m resolution ArcticDEM. Seven optical ages, two from a 223 m a.s.l.beach ridges and five from eolian dunes, and radiocarbon ages from wood and peat were obtained and provide additional chronological constraints within the region. A stepwise pattern of eastward retreat is reconstructed, which shows impounded drainage along the ice margin creating a series of pro-glacial lakes at different elevations along the margin and through time. During this eastward retreat the Snake Creek Moraine was deposited into a shallow pro-glacial lake. The optical age of the beach ridge currently at 223m a.s.l.indicates deposition at 12.0 ± 0.7 ka BP. This is the most limiting age and suggests the previously published ice margin positions used for the region are older as the deposition of the Snake Creek Moraine is estimated at 12.5 cal. ka BP. The eolian optical ages show continual eolian reworking indicating the landscape was exposed after 10.4 ± 0.3 ka BP. The radiocarbon ages of 2.7 – 2.1 cal. ka BP cal. ka BP from wood and peat is much younger and thus not related to deglaciation. The updated ice margin retreat sequence is more detailed than those currently being used currently continental-scale ice sheet models, and also provides new evidence to constrain the evolution of proglacial lakes, which were open to northwestward drainage down the Mackenzie River Valley. This study provides new insights into the ice-flow and deglacial history of the western LIS, which are constrained by field data and observations. The ice-flow history and till stratigraphy detailed in this research provides new constraints for establishing the locations of past ice divides. Updates to the ice margins and lake limits during deglaciation show complex eastward retreat and geochronology ages indicate the area was deglaciated at an earlier time than previously thought (at least 500 years). Finally, all results from this study provide important new information that should inform mineral exploration in the area, especially for techniques that utilize surficial sediments to trace, characterize, and locate buried targets of interest in bedrock.