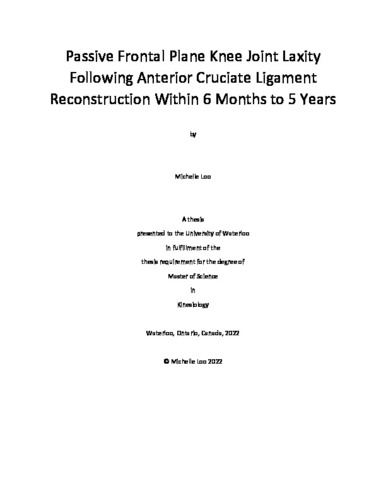 Following an anterior cruciate ligament rupture, surgical reconstructions aim to restore the joint stability. Increased frontal plane laxity has been observed in the anterior cruciate ligament deficient knee, intra-operatively immediately following reconstruction compared to contralateral knees, and in osteoarthritic knees. This indicates that surgical intervention may not have fully mitigated the increased frontal plane laxity associated with an anterior cruciate ligament tear. The primary objective of this study was to compare passive frontal plane laxity in a relatively young study cohort (aged 19-24) across three knee statuses (anterior cruciate ligament reconstructed knees (between 6 months to 5 years post-operation), contralateral knees, and knees from a control group), taking into account sex. It was hypothesized that the anterior cruciate ligament reconstructed knees would have the greatest frontal plane laxity, followed by the contralateral knees, and finally the control knees, where females would have a greater laxity compared to males across all three knee statuses. A secondary objective of this study was to quantify the repeatability and sensitivity of the frontal plane measurement system following design modifications that: removed the effect of the gravitational force from the plane of measurement, applied a consistent load between participants, allowed rotation about the knee’s natural joint center, and monitored muscle activity that ensured passive laxity measures. It was hypothesized that the frontal plane measurement system of this study would have a greater repeatability and sensitivity compared to previous designs reported in the literature. Twenty-four university aged participants (twelve females mean age 20.5 ± 1.8 and twelve males mean age 21.7 ± 2.3) were recruited for this cohort study. There were two groups: twelve participants with one ACL reconstructed knee and one contralateral knee (that had no previous ACL tear or repair) and twelve age- and sex-matched controls. Of the ACL reconstructed participants, six received a bone-patellar tendon-bone autograft and six received a hamstring autograft during their ACL reconstruction. Passive bilateral lower limb kinematic data was collected using infrared marker clusters while vastus lateralis and vastus medialis electromyographic readings were recorded. The mean laxity from three trials was measured using a free moving sled apparatus. Frontal plane laxity was defined as the passive varus-valgus tibiofemoral angular excursion in response to a varus-valgus moment of 10 Nm. For controls, the knee with the greatest measured mean frontal plane laxity was used. The standard error of measurement and minimal detectable difference was calculated using the mean of the three repeated laxity measures for the right limb across all participants. The means of the three repeated laxity measures for each knee status (ACL reconstructed knees, contralateral knees, and controls knees) were used in one two-way mixed model analysis of variance between ACL reconstructed knees and contralateral knees (status x sex) with an alpha level of 0.05 and two additional two-way ANOVA between ACL reconstructed knees and controls knees, and contralateral knees and control knees (status x sex) with an alpha level of 0.05. One t-test with an alpha level of 0.05 was used to determine if there were any statistically significant differences between the type of surgical reconstruction (bone-patellar tendon-bone graft or hamstring graft). The standard error of measurement and mean detectable difference was 0.7° and 1.8° respectively. No statistically significant knee status main effect, sex main effect and knee status x sex interaction occurred (all p>0.05). There was no significant difference in laxity between reconstruction types (p>0.05). This sample population achieved normal frontal plane knee laxity at short-term follow-up. This supports the possibility that the laxity previously measured in long-term follow-up is not residual laxity from the anterior cruciate ligament rupture that was insufficiently addressed by the reconstruction procedure. Increased frontal plane laxity that has been observed in anterior cruciate ligament reconstructed and osteoarthritic knees may instead be an outcome of the disease itself or other risk factors.