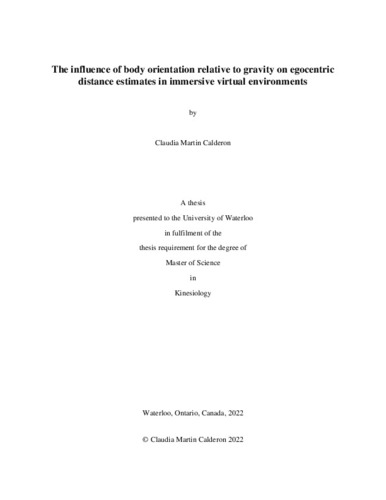 Virtual reality head mounted displays (VR-HMD) are a flexible tool that can immerse individuals into a variety of virtual environments and can account for an individuals head orientation within these environments. Additionally, VR-HMD’s can allow participants to explore environments while maintaining different body positions (e.g sitting, and laying down). How these discrepancies between real world body position and virtual environment impact the perception of virtual space or, additionally, how a visual upright with incongruent changes in head orientation affects space perception within VR has not been fully defined. In this study we hoped to further understand how changes in orientation (laying supine, laying prone, laying on left side and, being upright) while a steady visual virtual upright (presented in the Oculus Rift DK1) is maintained can effect the perception of distance. We used a new psychophysics perceptual matching based approach with two different probe configurations (L- and T shape) in order to extract distance perception thresholds in the four previously mentioned positions at egocentric distances of 4, 5, and,6 meters. Our results indicate that changes in orientation with respect to gravity impact the perception of distances within a virtual environment when it is maintained at a visual upright. Particularly we found significant differences between perceived distances in the upright condition compared to the prone and laying on left side positions. Additionally, we found that distance perception results were impacted by differences in probe configuration. Our results add to a body of work looking at how changes in head and body orientation can affect the perception of distance, however, more research is needed in order to fully understand how these changes with respect to gravity are affecting the perception of space within these virtual environments.