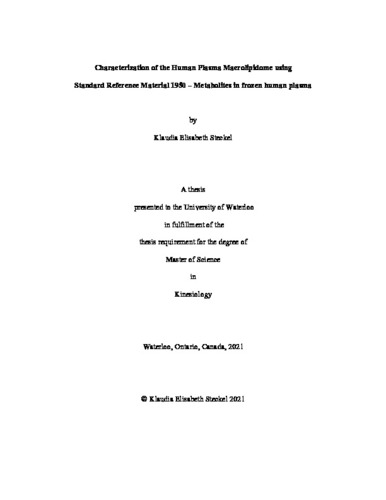 Standard Reference Material (SRM) 1950 Metabolites in frozen human plasma is a pooled plasma sample created by the National Institute of Standards and Technology (NIST) to be representative of plasma from the population of the United States of America. Attempts to characterize the lipidome of SRM 1950 have been done mainly at the sum compositional or “brutto” level but fatty acyl compositional or “medio” level information is limited. The “medio” level of information of lipids is necessary to link biological lipids to dietary intakes of fatty acids. An untargeted approach (data dependent acquisition) to characterize lipids of high abundance (the macrolipidome) in SRM 1950 at the medio level was used across three ultra-high performance liquid chromatography tandem mass spectrometers that included a Quadrupole-Orbitrap (qOrbi), a Quadrupole-Time of Flight (QToF) and a Trapped Ion Mobility Spectrometry-Quadrupole-Time of Flight (timsToF). Both positive and negative electrospray ionization modes were used in each instrument. Unique medio level characterizations were completed for 120 lipids in the qOrbi, 130 in the QToF and 108 in the timsToF across positive and negative polarity analyses. Quantitation of the top 20 medio lipids showed similar trends across the three platforms and represented 59% of the lipidome in the qOrbi and timsToF and 51% in the QToF. Phosphatidylcholine was consistently identified as the lipid class with the highest abundance, with a minimum of 20% abundance. Cholesterol ester 18:2 was consistently the lipid of highest concentration, with phosphatidylcholine 16:0_18:2 as the glycerophospholipid of highest concentration. The most concentrated triacylglycerol (TG) was TG 16:0_18:1_18:2 in the timsToF or TG 16:0_18:1_18:1 in the QToF while in the qOrbi there was coelution for both these TG species (isomers containing 16:1). Concentrations of lipids determined across the platforms were relatively similar although several of the concentrations determined with the QToF platform were lower in positive polarity. The medio level lipidomic characterization of SRM 1950 provides information on the fatty acyl composition of the most abundant lipid species in human plasma that can serve as a reference for future studies. Specifically, the lipids identified can be used for the development of mass spectrometry inclusions lists to develop routine targeted analyses of plasma to enable nutritional insights into the effects on health and disease on lipid metabolism in clinical studies.