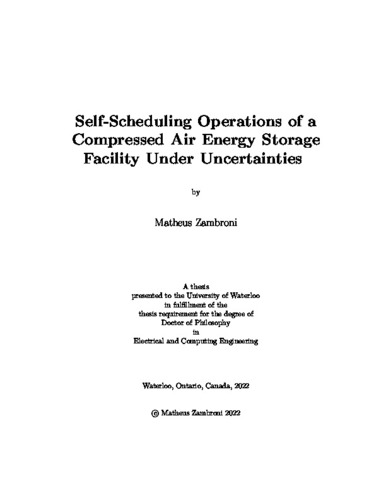 High penetration of Renewable Energy Sources (RES) such as solar and wind in power systems reduce carbon emissions and decentralize the energy generation. However, the intermittency of these sources introduces new challenges, since solar power is only available during sunlight hours and wind power is difficult to forecast and may present a high variability. Thus, since RES generation is not dispatchable, a power system with large RES penetration may not meet the demand at peak hours and experience voltage flickers and frequency fluctuations. To tackle these challenges, various Energy Storage Systems (ESS) technologies have been developed and deployed at different scales throughout the grid, providing either energy arbitrage or frequency regulation services to the power system. For the former, there are two mature large-scale ESS: pumped hydro storage and Compressed Air Energy Storage (CAES), with the latter being less restrictive in terms of location. Despite being a mature technology, there are only two large-scale CAES facilities worldwide. However, with the challenges modern power systems face nowadays, the bulk capacity, fast response, and efficiency of CAES facilities makes them an attractive ESS alternative. Electricity prices vary throughout the day depending on the system demand. At low demand, low-cost generators operate, resulting in cheaper electricity; at peak demand, more expensive units operate, hence increasing electricity prices. These electricity price variations opens opportunities for pro table businesses. In this context, an ESS facility owned by a private investor, depending on its capacity compared to the overall system, may participate as a price-taker or as a price-maker in electricity markets. Due to its bulk capacity, CAES can provide energy arbitrage to the grid and participate in the energy and reserve markets. Also, CAES newer designs decouple the charging and discharging processes using two synchronous machines, providing enhanced frequency regulation services. Since a CAES facility presents physical limitations, its optimum daily schedule must be determined a priori. Given the day-ahead electricity price forecast, an optimum schedule can be determined through self-scheduling models, where the daily pro t of the facility is maximized, which requires that the facility be properly modeled. Furthermore, with the high penetration of RES new and large sources of uncertainty have been introduced, particularly in generation and real-time market prices. Therefore, these uncertainties must be properly considered in CAES modeling and operation. In this thesis self-scheduling models for a price-taker CAES facility, that partakes in energy and reserve markets under electricity price uncertainties, are proposed. Using an existing non-linear model for a CAES facility, Robust Optimization (RO) is employed to represent price uncertainties, yielding an optimum schedule that protects against the worst-case scenario for a given level of conservatism. The model is benchmarked with Monte Carlo Simulations (MCS), presenting a lower computational burden while computing scenarios that the MCS fails to obtain. Thereafter, a novel linear thermodynamic model for the CAES is proposed, using mathematical tools for linearization such as McCormick Envelopes and linear-piecewise approximation, which compared with an existing non-linear model, it yields similar results at significantly lower computational costs. The novel model is further expanded considering uncertainties in electricity prices using RO and Affine Arithmetic (AA) approaches. The AA method keeps track of correlated uncertainties, yielding an optimum range of schedule with adjustable power dispatch for given real-time mismatches in price forecasts. Both methods are compared and benchmarked with the MCS approach, presenting significantly lower computational costs, with pro t intervals obtained from AA being more conservative than MCS and RO, i.e., the former method envelops the intervals obtained from the latter techniques. The CAES pro t and schedules for different levels of initial and fi nal State of Charge (SOC) of the facility are then assessed in order to estimate an ideal SOC level where the facility may maximize its participation and pro fit. Finally, a Principal Components Analysis (PCA)-Affine Policy (AP)-based self scheduling model for the CAES facility is proposed. PCA is a knowledge extraction based mathematical tool to reduce the dimension of a mathematical model by removing the less relevant variables, which may decrease the accuracy of the model. The method of AP, similar to AA, keeps track of correlated uncertainties and provides an optimum range of schedule with adjustable power dispatch for real-time mismatches in price forecast. The PCA-AP model is compared with AA and MCS, which is computational more expensive compared with AA, provides a tighter interval of pro t, hence ensuring a safer margin of operation in pessimistic scenarios. Compared with the MCS, similar results were obtained at a lower computational cost. The operation of a CAES facility charging and discharging concurrently is then examined, which offers the facility with a larger set of combinations for its operational states, and hence greater pro t, but at increased computational costs.