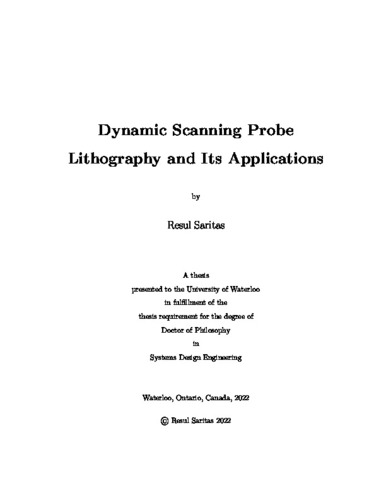 This dissertation presents a novel, benchtop, low-cost, high-throughput direct surface patterning method dubbed dynamic-Scanning Probe Lithography (d-SPL). It employs a scriber mounted via a spring-damper mechanism to a nano-resolution 3D stage. As the scriber traverses the substrate surface, non-uniformity in the surface morphology leads to time-variation in the magnitude and direction of the contact force, which in turn generates scriber vibrations. The spring-damper mechanism dissipates those vibrations and stabilizes the contact force, thereby enabling long and uniform micro and nano patterns on a wide variety of substrates and preventing scriber tip failure. An analytical model was developed to investigate the dynamics of d-SPL and determine its safe operation conditions and limitations. It was used to investigate and explain, for the first time, a small micro-scale chatter phenomenon observed in the response of d-SPL. The model was validated through comparison to experiments. d-SPL was utilized for high velocity fabrication of micro and nanochannels at 1 mm/s. The channel dimensions are controlled by the scriber surface contact force. d-SPL also provided the basis for a novel rapid fabrication method that enhances the output power of triboelectric nanogenerators (TENGs) by simultaneously creating centimeter-long nano grooves (NGs) and nano triangular prisms (NTPs) on the surface of polymeric triboelectric materials. The output power of the nano structured TENGs was 12.2 mW compared to 2.2 mW for flat TENGs. A coupled electromechanical model was developed to describe the energy flow through the TENGs. Analytical and experimental results for the proposed TENGs show that they can harvest low-frequency and wide-band vibrations below 10 Hz. d-SPL can also fabricate long micro and nano wires through a continuous chip removal process. The wire dimensions can be controlled via the tip-substrate contact force while taking into account the substrate material. Continuous chip removal produced millimeter long, helical shaped gold nano wires out of a 600 nm thick gold layer on a dielectric substrate. Continuous flexible helical polymeric micro wires were obtained by chip removal from a Poly (methyl methacrylate) (PMMA) substrate. The wires were coated with 50nm Silver (Ag) layer to produce flexible conductive micro-helical wires. It was found that these wires can behave as freely standing cantilever beams. A low-cost and rapid fabrication of back-gated field effect transistors (BGFETs) was also developed based on d-SPL. A silver layer pre-coated on top of another SiO2 layer was patterned into interdigitated electrodes (IDEs) to form the source and drain of a FET with a channel length of 20 µm. A glycol-graphene mixture was then deposited to create the channel between the source and drain using a nanostage integrated microplotter and allowed to dry naturally. The Ion/Ioff ratio of the fabricated BGFET was calculated from the I-V curve as a 10^3.