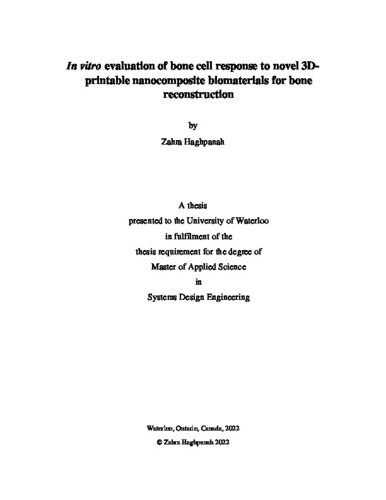 Critical-sized segmental bone defects are a challenging problem for orthopedic surgeons. These defects are unable to heal spontaneously within a patient’s lifetime. Thus, biomaterials are used to repair such defects and provide a substitute for the lost bone in order to recover both structure and function. Biomaterials should ideally be osteoconductive, osteoinductive, and resorbable to stimulate osteogenic differentiation and remodeling in addition to having sufficient mechanical properties. Biomaterials designed to undergo remodeling should present a balance between the biomaterial’s resorption and new tissue formation. Thus, the interaction of any novel biomaterial with bone cells, osteoblasts and osteoclasts, should be investigated. In this research, a set of novel 3D printable nanocomposite biomaterials containing acrylated epoxidized soybean oil (AESO) or methacrylated AESO (mAESO), polyethylene glycol diacrylate (PEGDA), and nanohydroxyapatite (nHA) was produced using a masked stereolithography (mSLA)-based 3D printer. The effects of volume fraction of nHA and methacrylated AESO on the interactions of bone cells (osteoblasts and osteoclasts) with the nanocomposites were evaluated in vitro and compared to a control biomaterial, hydroxyapatite (HA). Two separate studies, one using osteoblasts and the other osteoclasts, were performed to characterize cell response. In the osteoblast study, immortalized mouse pre-osteoblast MC3T3-E1 cells were differentiated to osteoblasts (dMC3T3-OB). The effects of the addition of nHA and methacrylation of AESO on osteoblast-like cells were studied. Adhesion, proliferation, and activity of dMC3T3-OB were studied by seeding cells on the 3D-printed discs for 1, 3, and 7 days. Overall, each of the nanocomposites was shown to support dMC3T3-OB cells’ adhesion, proliferation, and activity, and compared to the HA control. Incorporating higher amounts of nHA enhanced cell adhesion and proliferation, although it didn’t influence cell activity, as measured by Alkaline Phosphatase (ALP). The presence of mAESO in the nanocomposites resulted in greater adhesion, proliferation, and activity at day 7 compared to the AESO nanocomposites, which may be explained by the increase in stiffness of mAESO nanocomposites. In the osteoclast study, mouse RAW 264.7 macrophages were differentiated to osteoclasts using receptor activator of nuclear factor kappa-Β ligand (RANKL). The differentiated cells were purified by serum gradient purification and then were cultured on nanocomposites to evaluate their osteoclast-mediated resorption. The adhesion and activity of the differentiated and purified RAW 264.7 cells (dRAW-OC, osteoclast-like cells) were studied by seeding the cells on 3D-printed discs for 7 days. The effect of methacrylation of AESO on the adhesion, tartrate-resistant acid phosphatase (TRAP) staining, actin ring size, number of osteoclast-like cells, and number of nuclei per osteoclasts were investigated. Results showed excellent osteoclast-like cells survival, defined actin rings, large multinucleated cells, and higher number of TRAP-positive cells on mAESO-based nanocomposites compared to AESO-based one. The osteoclast response on the mAESO discs was also comparable to the HA control. Calcein staining was used to visualize pit formation on the biomaterials. AESO-based and mAESO-based nanocomposites, and surprisingly the HA discs, did not exhibit any sign of resorption pits formed by the osteoclast-like cells. While we were unable to obtain osteoclast-mediated resorption pits, a confocal image of a pit-like structure was obtained as a proof-of-concept to perform depth and volume calculation. Taken all together, the results presented in this thesis demonstrated that mAESO-based nanocomposites containing higher amounts of nHA had better interactions with osteoblast-like and osteoclast-like cells, comparable to interactions with HA controls. This suggests future potential for bone defect repair.