Migration Narratives from Third Wave Bulgarian Immigrants in London, Canada: Internalization of Balkanism and its Effects on Citizenship 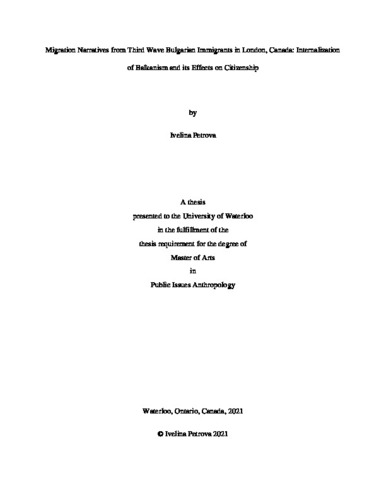 Bai Ganio, a brash fictional character famous among Bulgarians who grew up during communism, has become something of an example of what not to do for Bulgarian immigrants to Canada aged thirty-five and up. Subconsciously, they tend to model citizenship and moral behaviour opposite to his as they work to integrate into Canadian society. Interviews with eight Bulgarian immigrants in London, Ontario who arrived between 1999 and 2005 were conducted with a focus on their migration narrative. A cross-chronotopic lens was applied to better understand how internalization of ‘the Balkan other’ (Bai Ganio) and their invisibility as white ethnic immigrants are presented in several scales. Bai Ganio, created by Aleko Konstantinov around the time of independence from Ottoman Rule, represents Bulgaria’s longing to become a part of Europe. The figure gained popularity again in the 1990s after communism ended in 1989 when Bulgarians were free to move to wherever they wished. The participants in this research think of themselves as being among the intellectuals whose leaving caused a brain drain from Bulgaria. This thesis argues for the importance of drawing on Bulgarian history when having conversations about their migration because it reveals the internalization of their image as a non-modern “others” and how they orient to it. Analyzing their narratives through the framework of chronotopes, which tie in aspects of time, space, and figures of personhood, further reveals how the same dynamics of understanding their identity in different spaces and time is constantly being presented in multiple scales as the United States, Bulgaria and Canada are in constant relation in their narratives.