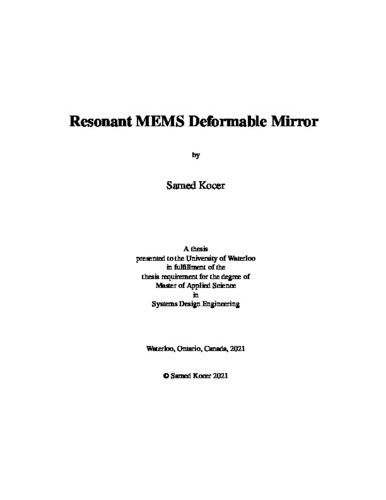 The performance of optical systems is often affected by aberrations that degrade the image resolution and contrast. These aberrations may be induced from atmospheric turbulence, imperfection in the optical alignment, or inhomogeneous refractive index distribution. Adaptive optics (AO) technology has been incorporated into different types of imaging instrument to correct optical aberrations. Deformable mirrors (DMs) are commonly used correction elements in AO due to their high optical performance, low cost, and reflective characteristics which enable to operate at different wavelengths. A DM can correct the aberrations by introducing a counter deformation to its reflective surface with respect to aberrated wavefront. Various DM designs have been developed over the last several decades to improve the state-of-the-art. Conventional DMs were invented to be used in astronomical observations. They are bulky, expensive, and required high voltages to operate. The development of micromachining introduced MEMS based DMs as an alternative to conventional ones and extended the utilization of AO in many areas including microscopy, laser machining, ophthalmoscopy, and optical coherence tomography (OCT). The design of DMs can be classified in two categories based on their reflective surface topology either segmented or continuous. Segmented DMs impose piston-tip-tilt motion to deform surface. They prevent cross coupling between actuators and provide high strokes, but the gaps between each segment scatter the light, and cause diffraction. Continuous DMs accomplish almost zero diffraction operation, however inter-actuator coupling occurs. MEMS DMs are preferred due to their compact size, low power consumption, and relatively fast response time. Piezoelectric, electrostatic, electrothermal, and electromagnetic actuation mechanisms are applied via a distributed actuator array underneath a mirror surface to deform its profile. Majority of the MEMS DM designs have mainly built on direct current (DC) electrostatic or piezoelectric actuation mechanisms. The former are encumbered with high electrode counts, special control algorithms and associated hardware. The latter are encumbered with hysteresis and complex structure which reduces their compatibility to micromachining. Besides, piezoelectric MEMS DMs might not be able to correct high and low order aberrations in a single actuator array design. Therefore, different electrode schemes might be necessary to replicate higher order aberrations, and each scheme requires different fabrication. Recent developments in AO have emphasized the demand for large stroke, low cost, easy-driven wavefront correction elements which built-in a simple miniaturized architecture to compensate optical aberrations rapidly in real-time. Thus, there is a need to develop such a system to advance the current state-of-the-art. In this thesis, we present a novel MEMS DM that can be used for AO to correct wavefront aberrations during real-time scanning. The DM employs resonant electrostatic actuation (REA) via 49 electrodes to deform a 1.6 mm circular plate dynamically. The DM surface was designed to be continuous to eliminate light diffraction across the facesheet. Unlike bias actuated and piezoelectric DMs, it can correct both low and high order aberrations within a simple device structure using a single actuator array by applying a single voltage waveform, thereby eliminating the need for individually addressable electrodes and the use of complex influence functions. REA drives the mirror at resonance and exploits dynamic amplification to increase the stroke with a minimal number of electrodes. The mirror depicts a low cost and high-performance alternative to previous MEMS DMs. The DM was designed and fabricated using a silicon-on-insulator (SOI) MEMS fabrication process. Finite element (FEM) simulations were conducted to determine natural frequencies and mode shapes of the DM geometry. Experimental characterization was carried out using laser Doppler vibrometer (LDV). To demonstrate mirror capability the DM was integrated into an optical system as a varifocal mirror to shift the focal point of a 532 nm incident pulsed laser beam. It is shown that an 8 cm focal shift was realized between the focal lengths of 11 cm and 19 cm. The DM surface was controlled easily by changing the phase angle $\phi$ between the pulse signal of the incident laser beam and the drive signal of the DM. The mirror promises to advance the current state-of-the-art aberration correction techniques and can be used as an adaptive element in AO systems for axial scanning and 3D multiwavelength imaging.