Arborescent Polypeptides for the Targeted and Controlled Release of Drugs 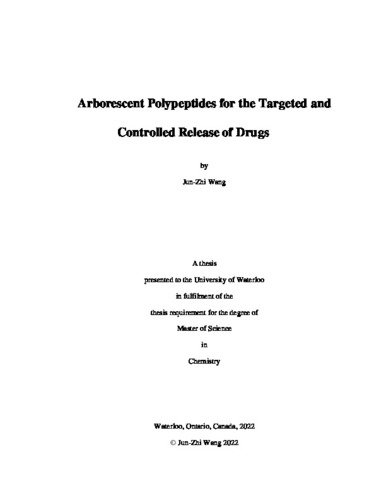 Amphiphilic block copolymer micelles are commonly used as drug delivery agents, but these micelle structures tend to dissociate upon dilution. In contrast, arborescent copolymers are highly branched unimolecular micelles that remain stable under diluted conditions. This thesis work deals with the synthesis and the characterization of pH-responsive arborescent copolymer micelles containing a poly(γ-benzyl L-glutamate) (PBG) core, a poly(Nε-carbonylbenzoxy L-lysine) (PZLys) inner layer, and a poly(ethylene glycol) (PEG) shell. One of the PEG chain ends was modified with an aldehyde group to couple with the amine groups of deprotected PLys chains and form imine bonds, allowing cleavage of the PEG chains under acidic conditions. The arborescent micelles were synthesized by a generation-based grafting scheme. Linear PBG was prepared by ring-opening polymerization of γ-benzyl L-glutamate N-carboxyanhydride with n¬-hexylamine as initiator. A fraction of the benzylic protecting groups was removed with HBr, to expose free carboxylic acid groups which were coupled with the amine terminus of other PBG chains to form a generation zero arborescent structure (G0PBG). This deprotection and coupling reaction was repeated using either PBG or PZLys chains to obtain higher-generation arborescent copolymers, G0PBG-g¬-PZLys and G1PBG-g-PZLys. The protecting groups of PZLys were then removed with HBr, and the PLys segments were coupled with aldehyde-terminated PEG chains. Arborescent structures with narrow molecular weight distributions (Mw/Mn < 1.10) were obtained up to generation G2, with molecular weights increasing exponentially for successive generations. In the deprotection of the Z groups on arborescent PBG-g-PZLys, the remaining benzylic protecting groups in the PBG core were also inadvertently deprotected. As a result, dynamic light scattering (DLS) measurements in water revealed the presence of aggregated species, attributed to electrostatic intermolecular interactions between the lysine and glutamic acid units. More consistent size and zeta potential measurement were obtained in phosphate buffered saline (PBS) and 0.1 M HCl solutions, to protonate the amine and carboxyl groups of G0PBG-g-PLys. In PBS, the size and zeta potential were found to be 8.1 nm and 13 mV for G0PBG-g-PLys, and 13.6 nm and 21 mV for G1PBG-g-PLys, respectively. To avoid aggregation under conditions closer to neutrality, it is suggested that an alternate protecting group be used for the PLys chains, to allow full deprotection of the PLys chains without affecting the PBG units. Imine formation between primary amines and aldehydes was found to be difficult. When a small-molecule amine was reacted with aldehyde-terminated PEG, almost quantitative yield was achieved at room temperature without removal of the water by-product. For linear PLys, drying agents were needed to drive the equilibrium towards imine formation and only 24% of the PEG chains were coupled. For the arborescent structures only a low imine yield was achieved, even by heating and stirring with a drying agent. Lower accessibility of the amine groups is considered to be the main cause for the decreased imine formation efficiency in linear PLys and the arborescent structures.