Lost in Translation: How the perception of Characters change in the German Translations of J.R.R. Tolkiens "The Lord of the Rings" 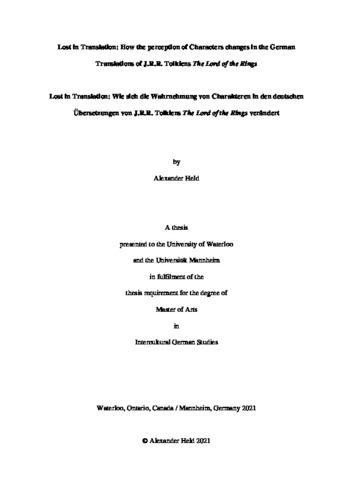 It is an accepted paradigm that translated texts will never be the perfect equivalent to the original text in a different language. It is a fact that foreign literary works will influence a culture through translations. However, this influence of the translation will usually be attributed to the author of the original work, not to the translator. The aim of this study is to raise awareness of the influence of the translator rather than the author, and thus to kill the author of the examined work, J.R.R. Tolkien's The Lord of the Rings, twice: once as the author influencing the German (fantasy) literature through the German translations of Margaret Carroux and Wolfgang Krege, and a second time as authoritative figure in the academic field of Tolkien studies. To this end, the three text versions have been read following the hermeneutic approach of Paul Ricoeur and subscribing to Roland Barthes Death of the Author paradigm. In this study, the most significant differences have been analyzed, making the impact of the translators on character perception, and, thus, on the influence of The Lord of the Rings, obvious. The analysis resulted in a plethora of significant differences between the three text versions, confirming that translations may deviate from the original work even when translating sentence-for-sentence. The changes include a discussion of xenophobia and racism, thinning the lines of social standings and relations, and many more. I argue that these differences are in themselves an argument for killing the author in Tolkien studies, creating an opportunity to discuss these aspects introduced by translators, and that they are evidence for how translators influence their culture as much as the author.

Alexander Quintus Andreas Held (2022). Lost in Translation: How the perception of Characters change in the German Translations of J.R.R. Tolkiens "The Lord of the Rings". UWSpace. http://hdl.handle.net/10012/17927