Gesta Principium: A Study of the Frankish and Turkic-Syrian Field Armies at the Battle of Dorylaeum, 1097 AD 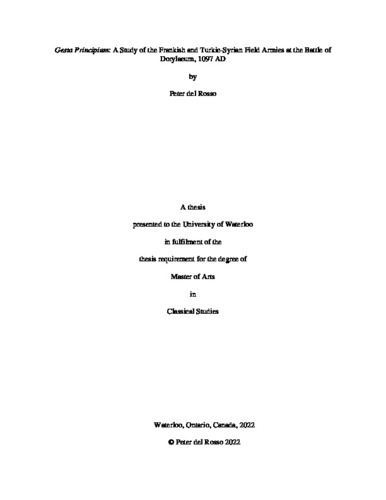 The purpose of this study is to showcase the Battle of Dorylaeum, fought between the Frankish invading forces of the First Crusade and the defending Turkic-Syrian armies of late eleventh-century Anatolia, as a military engagement between these two factions which outlines the unfamiliar nature of their styles of combat. After providing a brief history of the First Crusade in Chapter One, as well as outlining several key military engagements leading up to Dorylaeum itself, Chapter Two delves into a military-analytical study of Dorylaeum, outlining the favoured battle tactics of both Frankish and Turkic-Syrian field armies at maximal strengths and using examples from the Battle of Dorylaeum itself. A secondary study, the observation and survey of troop numbers present at the engagement as put forward by both primary and secondary sources, is conducted in an attached Appendix.