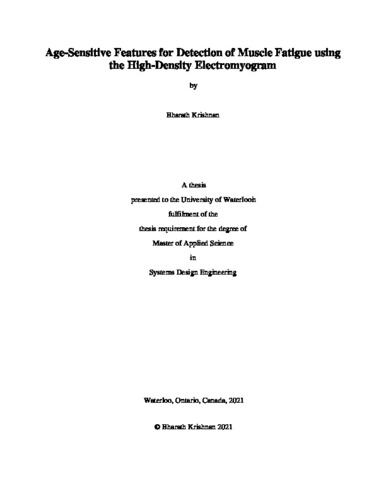 The processes behind fatigue development within the muscles have been a topic of interest for exercise scientists for decades. This is because fatigue is one of the primary reasons for a decrease in performance and increase in likelihood of injury during exercise[1]. Typically, muscle fatigue is detected through modifications of the amplitude and spectral characteristics of a surface electromyogram (sEMG), or the variability of torque signals recorded throughout a sustained contraction. However, the behaviour of these parameters with the generation of fatigue depends on a variety of factors. One major factor is age, where the age-related loss of muscle fibers, and changes in neuromuscular system impact how muscles adapt to and develop fatigue. The purpose of this study was to examine age-sensitive High Density Surface Electromyogram (HD-sEMG) features and investigate the effect of spatial filter type on intramuscular coherence analysis in fatigue detection. Fatiguing submaximal isometric contractions of the bicep brachii was performed by eight young (24.40 ± 2.42 years) and five elderly (72.90 ± 2.21 years) males, while HD-sEMG recorded signals from the biceps brachii and a dynamometer recorded torque signals. The task was performed at 20% maximal voluntary contraction (MVC). From the HD-sEMG signals, the mean intramuscular coherence was calculated in the alpha (11-15Hz), beta (16-29Hz), and gamma (30-50Hz) frequency bands each of which stems from different neurological origins. Statistical differences were only found in the alpha (p=0.0006), and beta (p=0.0207) bands between the pre-and post-fatigue conditions of the young group. Furthermore, a correlation between mean coherence and torque variability during the final 25% of the contraction before task failure revealed that both the age groups had positive correlation in the alpha band. Different correlations were found in the beta and gamma bands, with positive correlations being observed in the elderly group and negative correlations in the young group. These results suggest that age-related changes in the corticospinal pathway exist causing the elderly to be less fatigable when compared to the young population. This proposes that the introduced intramuscular coherence analysis can be used to obtain fatigue related features from HD-sEMG signals that are age-sensitive.