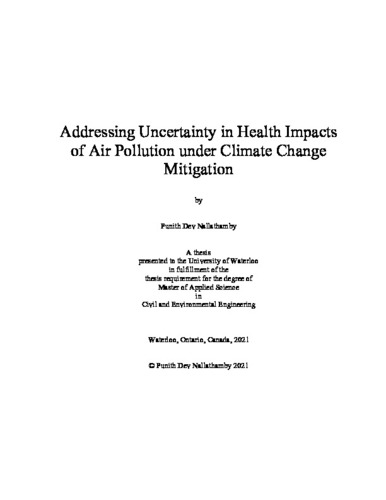 Simulations to evaluate climate policy take a lot of time, but little evidence exists to say how long is enough, especially for policy impacts related to air pollution. Air pollution and climate change are the two leading global environmental issues affecting human health. Climate change can increase air pollution, an effect called the “climate penalty”. Climate policy can thus reduce air pollution, offering “co-benefits” for human health and the economy. However, climate policy makers lack robust information on these air pollution related co-benefits. This is due partly to uncertainty in these co-benefits. One such uncertainty is due to the natural variability in the climate system. Another is the response of the human system – including human health and the economy – to changes in air pollution. Natural variability obscures the effects of climate policy on air pollution and its associated health impacts. However, the computational cost of modelling health responses under many future climate scenarios means little is known about the size of this effect, or its implications for policy evaluation. This study seeks to address these gaps by determining minimum simulation lengths needed to address natural variability. It employs a novel analysis of results from a previously developed integrated modelling framework. This framework implemented global climate policies consistent with the Paris Agreement on Climate Change. It captured resulting changes to illness and premature death in the United States associated with outdoor concentrations of air pollutants including ozone and fine particulate matter, and resulting economic damages. Five initializations of the climate system and 30-year modelling periods resulted in 150 annual simulations for each pollutant (ozone and fine particulate matter), policy scenario (reference, a policy that meets a 2 degree warming target, and a policy meeting 2.5 degrees), and time period (2050 and 2100). In this new analysis of these results, climate policies were found to produce large co-benefits that were highest in the Eastern US and increased from 2050 to 2100. These co-benefits also had significant uncertainty related to both natural variability and uncertainty in health and economic responses (“health-related uncertainty”). Uncertainty due to natural variability was reduced by sampling within the annual simulations and averaging their results together. This process was continued until all initializations fall within the 95% confidence interval of health-related uncertainty. At this point, the simulation length was deemed sufficient to filter out natural variability. The simulation length required was found to vary depending on the signal-to-noise ratio (SNR), where co-benefits are the signal and the spread due to natural variability is the noise. SNR values increased over time from 2050 to 2100. In 2050, some regions, like the Midwest, showed a lower SNR and greater influence of natural variability. For these cases, eight years or more of simulation were needed to address natural variability. For cases with high SNR, as in 2100, less than three years were needed for all regions in the US. This work demonstrates the effect of natural variability on air quality co-benefits, and provides insights to inform simulation lengths to address it.