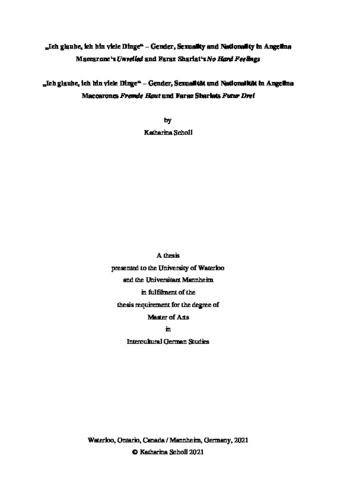 This thesis examines the connection of the identity aspects gender, sexuality, and nationality in Angelina Maccarone’s Unveiled (2005) and Faraz Shariat’s No Hard Feelings (2020). Both films feature queer protagonists who are fleeing or whose parents have fled from Iran to Germany. They deal with the experiences of queer people of colour at their arrival in Germany and examine their crossing not only of national boarders but also boarders between male/female and heterosexual/homosexual. After summarizing the most important concepts and definitions for the terms identity, gender, sexuality, nationality, and intersectionality I present an analysis of both films. Drawing on Judith Butler’s concept of gender performativity, I argue that not only gender but also sexuality and nationality are presented as performative and therefore not naturally given aspects of one’s identity. Following Laura Mulvey’s theory of the male gaze and George Yancy’s concept of the white gaze, this part of the analysis will also focus on seer/seen relations between characters that sexually desire each other. The second part of the analysis focuses on the arrival of the migrants in Germany. I argue that the refugee residences displayed in both films can be classified as non-places as described by Marc Augé, places that lack history, relation, and identity and therefore also cause a loss of identity for those who are forced to stay in those liminal spaces. Moreover, Germany as portrayed in the films is exposed as not being an open-minded, tolerant country. The last part of the analysis explores what happens to the characters if gender, sexual and national boundaries are crossed and how the other characters react to these boarder crossings. Taking an intersectional perspective, the analysis focuses on the characters and how they are exposed to several forms of discrimination and othering at the same time. Finally, in a comparison of the two films the similarities and differences in handling these topics are noted. I conclude that while in Unveiled the refugee residence is simply displayed as a desperate, liminal space, No Hard Feelings also highlights the possible action potential of a space in which people read as “the other” come together. Both films highlight the negative impact of stereotypes and attributions of foreigners or homosexual people. The characters struggle to position themselves on one side of the binary between national/foreigner, man/woman, heterosexual/homosexual. Therefore, both films plead for acceptance and normalization of life designs ‘in-between’ nations, genders, and sexualities.