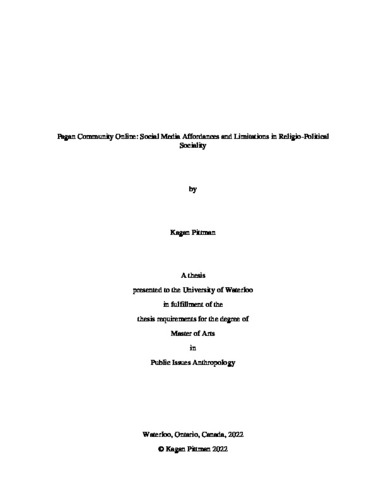 Ultra-conservative and social justice politics in North America have imbued political meaning into ideas of race and religion. Norse Pagans (i.e., Heathens) are factionalizing and contesting the significances of race and gender in their religious mythology, systems of magic, and communal belonging via the Internet. This thesis focuses on the role of digital platforms in shaping the religio-political sociality of Heathens and in forming “a community in practice” that stretches across several social media platforms and individuals’ offline lives. I draw on survey data, semi-structured interviews, and participant observation in a digital ethnography of The Asatru Community (TAC), an anti-racist Heathen religious group. I approach social media and the Internet as overlapping with the offline, resulting in a multi-sited social arena in which discourses of religious and political significance occur and are inherently intertwined. I also rethink existing definitions of community online. My study takes place primarily across Facebook and Discord, where most community activity occurs. I show how sentiments of community and individual identity are religiously and politically mediated via users’ bodies and speech across multiple Social Networking Sites and forms of interaction within each site. Thus, social media facilitates the creation of aesthetic styles and obscures geographic boundaries, a process that supports a unified sense of community and identity, while also challenging the division between online and offline.