Use of water isotope tracers to elucidate hydrological conditions of lakes in the Peace-Athabasca Delta over space and time: A foundation for lake ecosystem monitoring 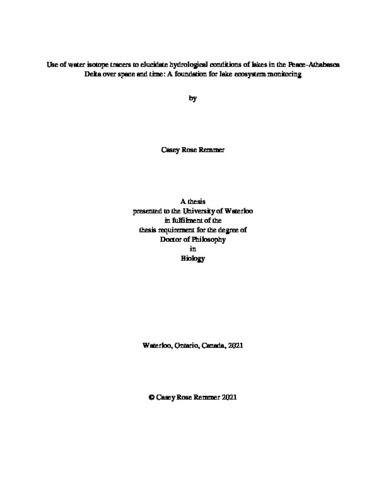 Hydrological monitoring in complex, dynamic northern floodplain landscapes is challenging but increasingly important as these ecosystems come under threat from multiple stressors, including climate-driven decline in freshwater supplied by rivers draining the hydrographic apex of western North America. Sustainable approaches capable of tracking status, trends and drivers of lake water balances in complex, remote landscapes are needed to inform ecosystem stewardship and water-security actions. The Peace‐Athabasca Delta (PAD) in northern Alberta, Canada, is a Ramsar Wetland of International Importance reliant on episodic river ice‐jam flood events to recharge abundant perched lakes and wetlands. However, the frequency of these floods has been in decline for decades over much of its area. Compounding concerns about water-level drawdown have prompted the need to improve knowledge of lake water balances and establish a lake monitoring program. Yet, the delta’s remoteness and dynamic nature present challenges to these goals. In this thesis, I address hydrological knowledge gaps essential to understanding spatial and temporal patterns of hydrological processes and their influence on lakes in the PAD. First, we assess the legacy influence of a large-scale ice-jam flood in 2014 on hydrological and limnological status of lakes in the PAD by integrating spatial and temporal data. Analysis of water isotope compositions and water chemistry measured at numerous lakes across the delta shows that hydro-limnological effects of the flood event of 2014 failed to persist beyond the early ice-free season of 2015. Isotope-inferred paleohydrological records from five hydrologically representative lakes in the PAD indicate that periodic desiccation during the Little Ice Age occurred at the most elevated basin in response to locally arid climatic conditions and reduced flood frequency, yet other lower elevation sites were influenced by high water level on Lake Athabasca owing to increased snowmelt- and glacier-derived river discharge. In contrast, water isotope data during the past 15 years at all five lakes consistently document the strong role of evaporation, a trend which began in the early to mid-20th century according to sediment records and is indicative of widespread aridity unprecedented during the past 400 yr. We suggest that integration of hydrological and limnological approaches over space and time is needed to inform assessment of contemporary lake conditions in large, complex floodplain landscapes. Next, we use water isotope compositions, supplemented by measurements of specific conductivity and field observations, from 68 lakes and 9 river sites in May 2018 to delineate the extent and magnitude of spring ice‐jam induced flooding along the Peace and Athabasca rivers. Lake‐specific estimates of input water isotope composition (δI) using a coupled-isotope tracer approach were modelled after accounting for the influence of evaporative isotopic enrichment. Then, using the distinct isotopic signature of input water sources, we develop a set of binary mixing models and estimate the proportion of input to flooded lakes attributable to river floodwater and precipitation (snow or rain). This approach allowed identification of areas and magnitude of flooding that were not captured by other methods, including direct observations from flyovers, and to demarcate flow pathways in the delta. We demonstrate water isotope tracers as an efficient and effective monitoring tool for delineating spatial extent and magnitude of an important hydrological process and elucidating connectivity in the PAD, an approach that can be readily adopted at other floodplain landscapes. Finally, we use over 1000 measurements of water isotope composition at ∼60 lakes and 9 river sites during the spring, summer and fall of five consecutive years (2015–2019) to identify patterns in lake water balance over time and space, the influential roles of evaporation and river floodwaters, and relations with meteorological conditions and river water levels. Calculation of evaporation-to-inflow ratios using a coupled-isotope tracer approach, displayed via generalized additive models and geospatial ‘isoscapes’, reveal strongly varying lake water balances. Results identify distinct areas vulnerable to lake-level drawdown, given the likelihood of continued decline in ice-jam flood frequency, longer ice-free season duration and reduced snowmelt runoff. Results also demarcate areas of the delta where lakes are more resilient to factors that cause drawdown. The former defines the Peace sector, which is influenced by floodwaters from the Peace River during episodic ice-jam flood events, whereas the latter describes portions of the active floodplain environment of the Athabasca sector which receives more frequent contributions of Athabasca River floodwaters during both spring ice-jam and open-water seasons. Efficiency of water isotope tracers to capture the marked temporal and spatial heterogeneity in lake water balances during this 5-year time span, and their diagnostic responses to key hydrological processes, serves as a foundation for ongoing lake monitoring, an approach readily transferable to other remote and dynamic lake-rich landscapes.

Casey Remmer (2022). Use of water isotope tracers to elucidate hydrological conditions of lakes in the Peace-Athabasca Delta over space and time: A foundation for lake ecosystem monitoring. UWSpace. http://hdl.handle.net/10012/17890