“… als hätte man gerade begonnen zu existieren”: Identity Between Experiences of the Unfamiliar and the Question of Origin in Lutz Seiler’s Novel Stern 111 (2020) 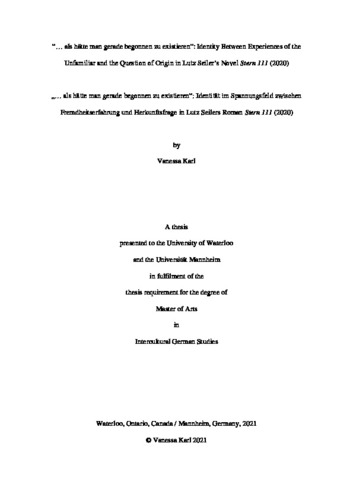 To this day, scholars and writers are concerned with the events of the Wende period and the representation of the DDR in Germany’s cultural memory. This period and its consequences are still relevant today and therefore also questions about a person’s origin and identity. This not only becomes apparent in the encounter of international cultures with their own languages and more or less different pasts but also on “German ground” between two German states: the BRD and the DDR. Already in 2014, Lutz Seiler addressed the DDR in his debut novel Kruso, for which he received the Deutscher Buchpreis. In 2020, he was awarded the Preis der Leipziger Buchmesse for his second novel Stern 111. There has been made no significant research on Stern 111 yet, so this thesis will make a first attempt to locate the novel within discourses of the DDR and Wende period and is concerned with mainly two aspects: the protagonist’s transition from adolescence to adulthood and his transition from a craftsman to a poet. The DDR is not the main plot element, neither before nor after the fall of the Berlin Wall, but functions as a catalyst for the protagonist’s emancipation and individuation. This sets the novel apart from other texts written on the subject. Following a constructionist approach, this thesis combines the discourses “Herkunft” (origin) and “Fremdheit” (otherness/the unfamiliar) and connects them with the concept of narrative identity. The following questions will be guiding the argumentation: How do the characters identify themselves? What identities are attributed to them by others? How do the characters experience “otherness” of the self and the people around them? How is identity negotiated between personal individuation and historical context? The novel illustrates dissolving identity structures in a time in which a whole system falls apart. This forces the characters to find ways of dealing with the imminent loss of security and identity. By exploring such ways the novel introduces a many-faceted notion of origin and identity that is repeatedly affected by change and renegotiation. Rather than being committed to a linear structure, it highlights fragmentary and recurring elements of plot and narrative structure. Such a fragmentary construction of identity is shown throughout the novel, the process of individuation as part of an attempt to achieve a coherent unit does not come to completion.