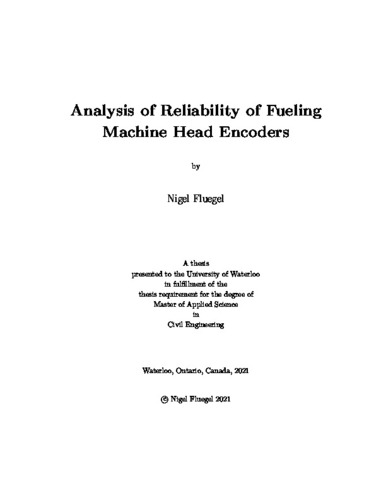 The objective of this thesis is to investigate in-service performance and reliability of four principal encoders used to guide the motion of the fueling machine (FM), which is used to support the fueling operation in a CANDU nuclear power reactor. A primary function of an encoder is to track the precise position of a fueling component, such as the charge tube and ram. However, the tracking of position is occasionally prone to error due to faults in the encoder operation. The sequence jump is such a fault in which the encoder output about the position of a component suddenly increases by a large magnitude in a spurious manner. The sequence jump error is normally a result f unavoidable noise and disturbances in electric circuits and buses connecting the encoder with the fuel handling computers. In such case, the encoder functionality is restored by simple fault recovery process. However, the sequence jump error is also triggered by mechanical faults, such as worn tracking gears or faulty bit-readings. In such cases, the sequence jump error continues to occur so frequently that fueling operation is significantly interrupted. This prompts the replacement of the encoder via a maintenance outage, which also costs resources and lost power generation. At present, there is no capability to predict the reliability and lifetime of encoders as well as no health monitoring strategy. This study aims to tackle these challenges by investigating the three particular aspects of encoder performance: (1) estimation of the lifetime distributions, (2) stochastic modelling of the occurrences of encoder errors, and (3) analyzing the bit patterns of encoder sequence jump errors for health monitoring purposes. This study is based on about 20 years of historical operating data related to these encoders from a nuclear station in Canada. The encoder lifetime distributions are estimated using the lifetime histories collected from the plant maintenance database. These distributions are used to estimate the Mean Time To Failure (MTTF) and mission reliability over an operating interval. The stochastic process modelling and probabilistic bit pattern assessment during a sequence jump error helps to formulate a health monitoring strategy for encoders. The models developed in this research will help to improve reliability of fueling operation, and reduce the unavailability and generation losses caused by abrupt encoder failures.