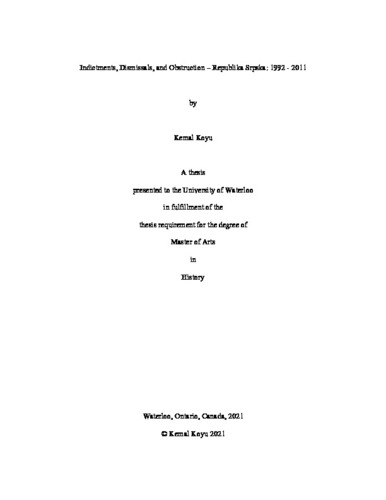 This work details the transformation of the Republika Srpska from its foundation in 1992 to the election of Milorad Dodik as the entity's president in 2011. It covers the bloody birth of the RS and the role of its founders in the within the Serb Democratic Party (SDS). It extensively discusses the postwar political divisions between members of the SDS old guard, which include Biljana Plavsic, Radovan Karadzic, Ratko Mladic, and others. This work also discusses the rise, fall, and rebirth of Milorad Dodik who transitioned from a reformist oriented toward the West, to a reactionary bent on the independence of the RS. Throughout this time, the Office of the High Representative gained tremendous power within Bosnia and Herzegovina, and subsequently lost it. This work explains how American disengagement, force reduction, and shifts in the geopolitical balance of power caused the OHR's lacklustre decline and Dodik's empowerment.