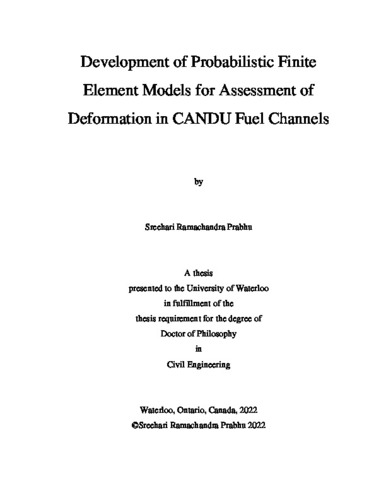 Fuel channels (FCs) are one of the most critical components in a CANDU reactor. A FC comprises a Pressure Tube (PT), a Calandria Tube (CT) and four garter springs and it acts as the pressure boundary between the “hot” heavy water reactor coolant and the “cold” moderator. The structural integrity of FCs is affected due to in-reactor deformation caused by irradiation induced creep, irradiation growth and thermal creep. The resulting dimensional changes are a function of reactor operating time and are exhibited as axial elongation, diametral expansion and wall thinning of PTs and the sagging of PTs and CTs, which in turn can lead to PT CT contact at axial locations between the spacers. These changes can significantly affect PT integrity; for instance, diametral expansion can lead to flow bypass, which may result in the insufficient cooling of the natural uranium fuel and the potential of fuel dry-out. The PT CT contact can lead to the formation of hydride blisters and the eventual delayed hydride cracking (DHC) of PTs. To ensure a reliable operation and to predict the future dimensional changes of the FC, a comprehensive understanding of the nature of in-reactor deformation and physically based models are necessary. The nuclear industry currently relies on 1D FEA and a limited number of Monte Carlo simulation trials to predict probability of contact and make risk informed decisions. This thesis critically analyzes the current practices of the industry in assessing PT CT contact risk and develops computationally efficient and robust probabilistic models based on advanced 3D FEM of FCs for making better risk informed decisions. In this study, 1D and 3D finite element models are developed to simulate the in reactor deformation of a CANDU FC using the finite element analysis (FEA) package ABAQUS, in which the material deformation models of both the PT and the CT have been implemented as user subroutines using UMAT. The prediction comparison between the two models shows the need of 3D finite element models in correctly predicting the in reactor deformations. Since the prediction of time to contact is influenced by various uncertainties, such as change in, (i) the dimensions of the FC, and (ii) the material properties and boundary conditions of the FC, probabilistic simulation-based methods have been developed to assess the PT-CT contact risk and establish adherence with provisions of the Canadian Standards Association (CSA) Standard N285.8. An effective calibration approach for diametral creep strain and PT CT gap profile prediction is also proposed for making better future predictions of inspected channels. A new approach of coupling multiplicative dimensional reduction method (M DRM) with polynomial chaos expansion (PCE) method is proposed which significantly reduces the computational cost of probabilistic finite element analysis using expensive to evaluate finite element models. The proposed method is applied for probabilistic contact assessment of CANDU FCs by considering 1D and 3D FE models and different PT orientations, which significantly influence probabilistic contact results. Important findings and insights on contact assessment is presented, which would benefit the nuclear industry. The low computational cost and predictive capability of the proposed method is suitable for carrying out full probabilistic assessments of CANDU reactor cores for units with 380 or 480 FCs.